There are notable exceptions – think A Bigger Splash, Some Like it Hot or The Birdcage – but the rule that English-language remakes are always inferior to the original invariably stands up. And the argument is given another example in 2020 with the underwhelming Downhill, Nat Faxon and Jim Rash’s remake of Ruben Östlund’s Cannes award-winning Force Majeure.

This year the idea that English-speaking, and especially American, audiences won’t embrace subtitled films has again been shown up with the success of Parasite. So when you have a remake that strips the original of its power, makes its subtlety blunt, its subtext broad, and deprives new viewers of the most powerful scenes, the reasons for its existence become scarce. Even in a world where the original didn’t exist, Downhill is just an okay film that can barely fill its sub 90-minute running time.

On a skiing holiday in the European alps with their two teenage sons, Billie (Julia Louis-Dreyfus) and Pete (Will Ferrell) are caught in a controlled avalanche that unexpectedly sweeps across them while they’re having lunch. Pete grabs his phone and runs, leaving Billie cradling their sons. When the snowflakes settle, everyone is left dusted, shocked, but otherwise unharmed. Pete sheepishly makes his way back to the table, but otherwise doesn’t acknowledge what happened. But his actions put a strain on his relationships, and the couple are forced to look at each other and themselves in a new light. 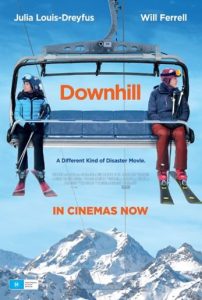 It doesn’t serve for this review to just say “go and watch the original”, but it’s instructive to understand how Östlund’s film works. How he creates an artifice of perfection with his central family that is broken by the father’s selfishness. How he maintains an emotional distance and doesn’t pick sides as he allows the audience to contemplate the couple’s flaws; how beneath the veneer of civility is a churning maelstrom of desires and fears; how ideas of societal expectations, gender roles, masculinity and relationship dynamics are all explored. In comparison Downhill is like a child’s version of a famous painting. It lacks the skill, depth, and finesse.

Ferrell is a sketch actor that doesn’t have the ability to carry the performance that the story requires. In Force Majeure the father is emasculated and has his role within the family and relationship questioned. Ferrell doesn’t have that energy and couldn’t have pulled off the original’s most impactful scene – a masterful combination of direction, staging and performance where the father totally breaks down in a long, ugly cry, when he finally admits his actions, and the children have to force their mother to comfort him. Removing this has neutered the core of the film. Louis-Dreyfus is more capable of the performance level required – her scene where she retells the distressing incident is well done – but she lacks the ability to convey the seething undercurrent of incandescent rage of the original, and the film is too keen to take her side rather than presenting the flaws they all possess. Writers Faxon, Nash and Jesse Armstrong have inserted broader comedy in an attempt to make up for the lack of depth, but none of this really works and relies on lazy American cliches like all Europeans are kooky and so openly sexual. The ending is typical of the issues facing the film. The original is a little surreal and highlights the falseness of the father’s redemption and suggests the true future of their relationship. In Downhill it’s so small scale, so powerless, such an inferior version.

There’s a place for remakes, a place that brings something new, interesting or different. But Downhill doesn’t go there. Another case of the original is best.

Downhill is in cinemas from 5th March through 20th Century Studios.

Written By
David Nagle
More from David Nagle
We asked last week whether Louie would finish the season on a...
Read More