Guns Akimbo is a grindhouse-light, high-octane affair with a colourful Scott Pilgrim aesthetic and tone. That’s a complicated assessment of a simple film. Daniel Radcliffe’s eclectic run of characters sees him become Miles, an internet troll who, after trolling the wrong person is knocked unconscious and awakens with guns bolted to his hands.

The heavily tattooed figures behind Radcliffe’s surgery run a Battle Royale-type web series that pits willing combatants against each other. Going by the acronym SKISM they evade the law, filming the fights with drones for the enjoyment of their large web audience. It’s a little like Roman gladiators meets World Star.

The direction and screenplay comes from the mind of Jason Howden. This is his follow up to 2015’s Deathgasm. Radcliffe is blackmailed to compete in the event when SKISM take his would-be girlfriend Nova (Natasha Bordizzo) hostage; threatening to kill her unless he competes. His opponent is Nix (Samara Weaving), a blonde homicidal Harley Quinn like character. Nix is a killing machine with a penchant for sexual vulgarities – ‘suck my… clit’ she remarks before unleashing a maelstrom of bullets on a warring gang of bikies. Her motivations for competing are not as bloodthirsty as she initially appears. 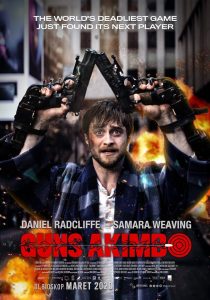 The film spends plenty of time taking veiled swipes at the YouTube generation, which might be considered biting the hand that feeds as I can’t see any other demographic interested in this. The real joke is really on anyone trying to dissect this too much. Satirical, farcical or ironic – the film doesn’t seem to care at all. The drug use is unnecessary and gratuitous. As for the violence, it’s ubiquitous, omnipresent and over the top.

The biggest plot hole of the film (if you exclude the entire plot itself) is the Storm Trooper accuracy every bad guy including Nix gets when it comes to taking out Radcliffe. There’s plenty of scenes showing her extreme proficiency with weapons, yet the dozens of bullets that she and others shoot at Radcliffe all clang harmlessly and inexplicably into the background. But I guess if this is a gripe you share with me then this isn’t the movie for you.

At times exasperating, at others humorous, there surely is an audience for this film somewhere. I imagine a Venn diagram of Tarantino nerds and teenage stoners. It may not be great art but it’s never boring. Rhys Darby also gets some great screen time as an eccentric bum with some classic Murray one liners.

Guns Akimbo is in cinemas from 5th March through Madman Films.