Among the most confronting viewing experiences in recent years, For Sama is an essential story of war torn Syria, and the revolutionary people of besieged Aleppo who tested the limits of endurance to stand against the regime of President Bashar al-Assad. The movie is comprised of four years of home video style footage from 2012 to 2016, shot by co-director Waad al-Kateab and compiled by al-Kateab in conjunction with co-director, English documentarian Edward Watts.

Through its 96 minute running time, al-Kateab’s voiceover narrates a letter to her toddler-aged daughter Sama, who is born amid the revolution, in a civilian makeshift hospital set up and run by al-Kateab’s husband Hamza. Though new life is celebrated, death is For Sama’s central trade. Hundreds of bodies take the screen as revolutionaries are executed by the regime, as relentless bombing forces civilian casualties to seek treatment in Hamza’s hospital and as a mother carries her dead son home from the hospital. 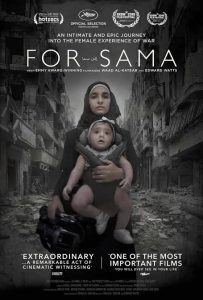 Little effort is made to understand the conflict at a high level, but the small stories told on screen tell all that is truly necessary. In the opening scenes Waad and Hamza are almost giddy with the possibilities of fledgling revolution, but by the film’s conclusion are reduced to pragmatic survivors in the face of their hopeless stand. Even by the mid-point, only Hamza and Waad’s close friend Afraa remains upbeat and smiling. When Afraa is finally is brought to tears, the film drives home its despair.

Graphic surgical scenes that run throughout the film – including a birthing suite scene that takes the film’s horrific streak to its exploitative extreme – will test even the most strong-willed viewer, even with the scene’s almost miraculous redemption at its conclusion. Though its horror is crushing, al-Kateab’s film is not haunting without end, as For Sama uses the grief and the violence to show the strength of those left behind in the city. It shows the bravery it takes to stay and highlights the community that is built in Aleppo’s persistence. Life goes on, because if it doesn’t, the revolution has already been defeated.

For Sama has attracted significant awards praise, earning a record four BAFTA nominations (the most ever for a documentary), an Academy Award nomination for Best Documentary Feature and the Cannes L’oeil d’Or for best documentary at the 2019 festival. For Sama deserves all the plaudits it has already received and the many more likely to come its way as the international release rollout continues. Despite that, it is not an easy movie to recommend, as it makes for a difficult viewing experience. Though perhaps it is the audience’s duty to push through that barrier, for the strength to endure its horror is a shadow of that shown by the people of Aleppo at its centre. If Waad al-Kateab has the strength to tell the story, we must be there to see it.

For Sama is in cinemas from 6th February through Umbrella Entertainment.

Written By
Connor Kret
More from Connor Kret
Among the most confronting viewing experiences in recent years, For Sama is...
Read More