Surrender. That’s what the A Hidden Life experience calls for. Ironically. A willingness to engage, to focus. An openness to Terrence Malick’s cinematic thesis. All these questions of heaven and earth. Someday we will know what all this is for. No mysteries then. Together, we will meet them. Colour, draining from the sky and into your eyes. Fingers dug deep into the earth, planting a future. Then clawing. Torn apart in frustration. The brush of a hand through the long grass, a lover’s hair. Light playing across a face, a wall, a cell, a shadow that passes away. Hand knit in hand, wrapped in the sounds of life; a cicada, a scythe’s sweep, a blade into the block.

Few filmmakers make cinema as tactile as Terrence Malick. They are creations with such a sense of place. Feel the alpine mist condense on your skin. The ache in the shoulders from the plow. The summer’s sweat, the taste of an apple, the weight of a child lifted up in your arms. Malick brings life to life so vividly. All your senses are alive; images, fleeting moments take root and then take flight in the mind. This is how we live with his characters. As his characters. Inside a situation to try to know and understand it.

It’s in this way we’re part of the life of Franz Jägerstätter (August Diehl), Fani (Valerie Pachner) and their three young children high up in the Austrian hills at the end of the 1930s. Here Malick’s signature floating, waist-level camera roams like a curious child. Trails, watches, searches, seeks to see and understand. Like the film, it sits, waits, contemplating, questioning. Theirs is a supposed idyllic life of simplicity, of commune with nature and the honesty and truth found through the labour of the land. But clouds gather. Franz is conscripted, and his understanding of what’s truly happening materialises. He returns to his family without fighting, but he can see the destination. Inside is a feeling he cannot shake, cannot ignore. He cannot do what he feels, knows, to be wrong. He will not, cannot, go again, will not fight. He will not swear an oath to Hitler. 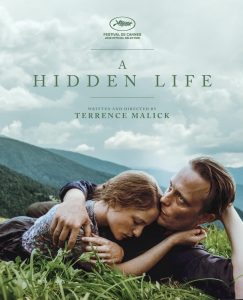 As only such a decision can, there are profound consequences. We feel them. Through the moving performances of Diehl and Pachner we feel the weight of their thoughts. The choice Franz makes, makes him. It flows through his life; his marriage, his family, the village, all feel the effect in varying ways. His relationships are fascinatingly complex and, while the villagers turn on him as a coward or traitor – and his wife as assumed abettor – this is no simple tale of moral superiority over some simple minded villagers or, even, the uniformed Nazis that Malick shows with some glimmer of humanity.

Malick is not interested in simple equations or answers. It’s the questions themselves that fascinate him. His faith and his questioning of it might shape his films, but their questions always have wider relevance. Franz’s mayor, priest, lawyer, jailer and judge all ask him what purpose his defiance serves. If no-one knows, if the world is unchanged, what’s the point? Even if his steadfastness gives them pause, imagining themselves in his place, it does little more than well up their own guilt. Is it moral to put one’s family in trouble for a decision you believe is right? To say one thing and do another? What’s the worth of self-preservation? The cost of doing injustice rather than suffer it? What kind of higher being would it please to go against yourself? How does one reconcile one’s faith with opposition from the very institutions you derive that belief from? The conversations search for truth, for meaning, but Malick doesn’t assume to answer, just to broach and tackle as best we all can.

It’s a beautiful, challenging film that harks back to Malick’s great works of the last few decades: The Thin Red Line or The Tree of Life. Either you’ll see it as cinematic poetry, or like a three hour perfume ad. I’m not going to convince you either way. I’m just glad he’s still trying to make films like this, no matter how they turn out in the end.

A Hidden Life is in cinemas from 30th January through 20th Century Fox.