It all started with a promise to a dog. In 2011 husband and wife team Molly and John Chester bought a 200 acre farm north of Los Angeles, partly out of desire for a lifestyle change and partly because they promised their new dog Todd that this move would be his last. Apricot Lane Farms is now the gold standard of ethical and biodynamic farming, and this behind-the-scenes documentary – directed, written, produced and staring John Chester himself – is a beautiful film. Certain to leave a smile on the face and a must-see for anyone with a green thumb, The Biggest Little Farm is documentary making at its most wholesome.

As more of us become aware of the horrific standards of factory farming, likely due to the rising popularity of documentaries, this is like a breath of fresh air. The team at Apricot Lane Farms have created a new and important blueprint for the way that farming can be, a wonderful pairing with last year’s excellent yet barely seen Wine Calling, about natural wine growing practices in the South of France. It seems that public interest is driving a new demand for environmentally sustainable farming.

When they first bought the farm the soil seemed to be mixed with concrete. Shovels could barely penetrate an inch into the baked surface. Previous owners and the worst drought California has experienced in 1200 years had done away with any sense of environmental balance. Yet under the tutelage of their mentor and friend, the late Alan York, the farm and literally the earth itself slowly regenerates before our eyes. 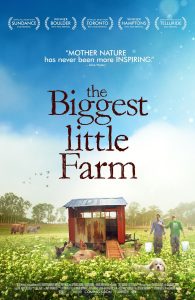 It’s all about balance. When it finally reaches a point of sustainability the environment will take care of itself. It’s rather simple when described, but ‘simple’ does not mean ‘easy’; as each year gets harder and costs begin to skyrocket, it’s clear that good intentions won’t protect this team from the harsh realities of farming.

When we finally see things begin to work as Alan York predicted it’s genuinely inspiring. Because they don’t use pesticides, instead snails decimate their fruit crops and fly swarms turn paddocks into maggot infested nightmares. Yet, what loves snails? Ducks. They let their ducks into the fruit orchards and create duck feeding heaven, the snail problem is solved and the duck manure adds extra nutrients into the soil, growing better fruit. Chickens eat maggots, solving the fly problem and giving these free range chickens a chance to run around. As the fly problem declines the bee population grows, pollinating the garden. The cyclical ecosystem in full effect. As all this is happening the soil regenerates, so when heavy rains finally come the farm soaks it up, while neighbouring properties using factory farming methods watch their top soil get washed away.

The target seems to be a younger audience; a lot of it seems stage managed and there’s nothing too challenging. The music sounds like its from a 1990s telemovie, lots of soaring strings and twee piano notes. The photography however is gorgeous. Crisp, high definition shots of farms in spring never go awry – imagine an episode of Play School guest directed by Terrence Malick.

Anyone interested in farming or agriculture should seek this out. Children will benefit especially. The Biggest Little Farm is the agriculture doco at its most accessible and visually stunning. It’s a  wholesome way to start the cinematic year.

The Biggest Little Farm is in cinemas from 16th January through Madman Films.

Written By
Simon Storey
More from Simon Storey
Full disclosure: I didn’t grow up with the Smurfs. My childhood had...
Read More