Mikhail Gorbachev is widely credited as one of the key figures in bringing an end to the Cold War between the US and the Soviet Union. That alone makes him an intriguing interview subject and one worthy of an audience’s attention. However, German film legend Werner Herzog and British documentarian Andre Singer’s profile on Gorbachev fails to be as monumental as a film with Gorbachev could be; their documentary Meeting Gorbachev is solid, but never quite does justice to its subject.

Herzog spends a lot of time with Gorbachev, and his interviews – filmed in three sittings over six months – permit the audience to gain a candid glimpse of the former USSR leader’s demeanour and thoughts. The film’s best moments are in Gorbachev’s personal revelations, many of which are emotional in nature. For those after something a bit spicier, politically speaking, this film certainly holds some historical value, however you could fit most of Gorbachev’s most poignant sound bites on a single page.

Seemingly appreciative of the opportunity to spend lots of time with – if not befriend – the historic figure, Herzog compromises his final product by being too soft towards his subject. The questions he asks aren’t bad, but they aren’t as provocative as a film profiling a controversial Soviet politician perhaps demands. In contrast, Herzog’s interviews mostly give us the pro-Gorbachev review of Soviet history, a narrative otherwise plagued with messiness and division. 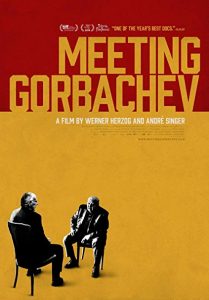 With many of the talking heads – Gorbachev included – answering Herzog’s English-spoken questions in their native tongue, there are pacing issues at times; the audience has to patiently wait for most of the experts in the room to articulate their points. Herzog is no exception; for all of his own expertise and insight, it’s fair to conclude that he likes the sound of his own voice. Indeed, numerous clips of his interviews with Gorbachev contain more Herzog than the star attraction.

With that said, Herzog certainly has his own compelling style, one that comes to the fore as he commentates over video clips, both historic and self-collected. The journalist in him is able to observe the ironies and subtleties in different situations, and these inferences help craft his overall picture into something slightly bigger than a question-and-answer interview session.

Yet here lies the film’s greatest weakness; what he creates is simply not big enough. Meeting Gorbachev is a simple picture, one largely free of flair and excitement. It’s the kind of documentary that could be watched at one-and-a-half times the speed without much being lost, and one that will only really appeal to a small audience. For Western European audiences, or those captivated by Cold War history, there’s probably something here for you. But for everyone else, this is probably one you can afford to miss.

Written By
Kevin Hawkins
More from Kevin Hawkins
Professional wrestling is a divisive form of entertainment, to say the least,...
Read More