Bombshell is a film of its time. Its three A-list female leads reflect the movement against male-centric casting, its impressive make-up work demonstrates that in 2019 anyone can now look like anyone, and its Trump-era premise feels so recent that this may as well be a news bulletin.

But films of their time aren’t necessarily the best of their time, an assessment that could be leveled against Jay Roach’s work.

Headlined by Charlize Theron, Nicole Kidman and Margot Robbie, Bombshell exposes the all-too-familiar tale of powerful men exploiting younger female employees. The television newsrooms of Fox are the key target, with the experiences of Megyn Kelly (Theron), Gretchen Carlson (Kidman) and the fictional Kayla Pospisl (Robbie) at the centre of the action.

Theron’s uncanny valley resemblance to Megyn Kelly, together with the film’s socio-political relevance, disguises the weaknesses of the storyline. Part of this comes from Roach and writer Charles Randolph’s desire to tell its story as truthfully as possible; what the film gains in authenticity, it loses in narrative convenience. 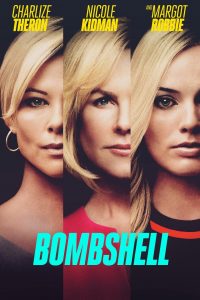 For instance, Kelly is held up as a counter to John Lithgow’s despicable Fox boss Roger Ailes, and is thus the closest thing the film has to a protagonist. But Kelly, along with Carlson and Pospisl, are not the feminist archetypes a Hollywood screenwriter might wish they were. Instead, they are flawed characters whose principles are not always in line with the #metoo movement’s aspirations. Likewise, most of their female counterparts are portrayed as vain, competitive and unforgiving. Their unwavering loyalty to Fox News, of all places, and conservative values certainly doesn’t help their case either.

This may well be the truth of the situation, but it leaves Bombshell a tad imbalanced in that its anti-heroes are more evil than its heroes are good. Indeed, the scenes that pack the biggest emotional punch are those designed to shock and disgust the viewer. In contrast, the moments where justice and common sense prevail fail to stand out, and are too often clouded with negotiations, indecision and exposition.

From a stylistic point of view, the film has occasional moments of novelty that echo some of the features of The Big Short and Vice. But these small touches, like Kelly’s opening monologue to camera and a narrated sequence whereby a woman commentates her sexual harassment experience, are employed too sporadically. The isolated presentations of Kelly, Carlson and Pospisl’s stories is another decision that promises intrigue, yet fails to warrant a satisfying justification.

Unfortunately films of their time age quickly, and Bombshell – for all its bells and whistles – is unlikely to stand the test of time, at least compared to other films attempting to ensure that contemporary issues of sexual harassment and gender equality in the workplace are supported with lasting cultural products. Compared to a film like Working Woman, which unlike Bombshell was written and directed entirely by women, Bombshell fails to overcome its superficialities.

Bombshell is in cinemas from 16th January through Studiocanal.