Following on from her runaway hit, Lady Bird, director/screenwriter, Greta Gerwig, teams up again with leading lady, Saoirse Ronan, to deliver yet another film adaptation (the seventh) of the Louisa May Alcott classic, Little Women.

The film begins with Jo March (Saoirse Ronan) seeking publication of her stories, inspired by her own life and those of her sisters. Unlike Jo, a wild and carefree tomboy, eldest sister, Meg (Emma Watson), is sensible and sophisticated, while Beth (Eliza Scanlen) is quiet and unassuming, counter to the vivacious and spoilt youngest sister, Amy (Florence Pugh). Unlike previous versions of the film (with the 1994 Winona Ryder version probably the most well-known by modern audiences), Gerwig’s film alternates between two timelines, the first and second volumes of Alcott’s novel. It’s a smart choice that serves to keep viewers engaged and invested in the sisters’ journeys.

If there’s one criticism to be made it’s that it isn’t always entirely clear which timeline we are in at the start of each scene. Amy’s scenes in Paris make it clear we’re in the later stages, however generally little effort is made to distinguish between the characters earlier and later ages. Timothée Chalamet, as Laurie, looks fifteen the whole film, and it’s hard to buy him as a married man. The cast generally all appear very young, even though they’re much older than their younger counterparts in the first timeline (29-year-old Emma Watson plays a 16-year-old). In an otherwise fantastic film, the make-up team probably could have aided in more clearly differentiating between the women as teens and adults. 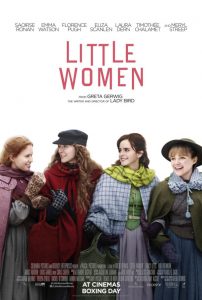 That’s not to say that the performances aren’t top notch across the board. None of the four actresses playing the March sisters are American, and yet three of them are convincing (with Watson the only one struggling to get rid of her British accent). Watson is well-cast, although Meg doesn’t seem to do much more than show off her beautiful smile while she laughs at the antics of all those around her. Florence Pugh’s star is fast on the rise following her turn in the horrific Midsommar earlier this year, and it will be exciting to follow her career in the years to come. Australian actress Eliza Scanlen is unrecognisable relative to her recent turn in HBO’s Sharp Objects, and while it’s easy to look past her given Beth is probably the least exciting character (she languishes in her sickbed for half the film), the comparison between the two roles makes it clear she has talent. Saoirse Ronan is the shining star of the piece, a clear choice to play Jo March, and she is oh-so-much more enjoyable to watch than Winona Ryder. The supporting cast are similarly excellent, including the gorgeous Timothée Chalamet as Laurie (if a bit too young-looking), Laura Dern as Marmee, Bob Odenkirk as Father, Tracy Letts as Mr Dashwood, and Meryl Street as Aunt March.

Stylistically the film is a delight, particularly in Jacqueline Durran’s costumes and the cinematography by Yorick Le Saux. The film is nothing short of stunning, and is complemented by a charming score by Alexandre Desplat.

Gerwig stays true to the source material, adding her own artistic flourishes by way of the structure of the film and some small moments that feel more modern, such as how Jo and Laurie dance on the porch like drunk teenagers instead of performing some carefully choreographed routine. Given the major theme of the film – trying to rise above the trappings of domestic life imposed on women by the society of the time – this modern vibe seems appropriate. It would be easy to assume that a film based on source material from the late 19th century would be too old-fashioned, but in fact it feels perfectly apt for the current zeitgeist.

Little Women is in cinemas from 1st January through Sony Pictures.

Written By
Claire Robson
More from Claire Robson
A few years ago, older audiences were given a rare gift in...
Read More