1917 is expert cinema. Riveting from the first minute until the last, not one moment is wasted. Coupled with the engrossing plot it’s also shot extraordinarily well. It’s cinematic poetry and deserves every superlative it will receive.

This is of course a WW1 film, set amongst the trenches and decimated towns of the western front. The film begins with expert navigator Lance Corporal Blake (Dean-Charles Chapman) being awoken for an urgent mission. His friend Lance Corporal Schofield (George Mackay) voluntarily accompanies him. The premise is a simple one. The two must reach a division of 1600 men by next morning’s dawn, and call off an attack on a retreating German force. The English falsely believe the Germans to be on the run, but in reality the Germans have coaxed them into a trap. The hope is that by sending only two men they will reach the destination faster than a larger party and not attract as much attention. The ‘retreating’ Germans have left behind booby traps and snipers.

Incredibly the entire film appears to have been made in one shot. There is the briefest of interludes separating two halves of the film in which a cut is made for dramatic purposes but it wouldn’t be inaccurate to market the entire film as a one cut real time experience.

The effect of a single hovering camera ghosting around the actors and environment creates an ultra immersive experience. It’s a little akin to the camera angle in a first person shooter video game. Those games are no doubt designed to make the player feel like they are viewing what happens as the protagonist. While you may not be the protagonist in the film it certainly makes you feel like a ‘player 3’. This is a film that hijacks the visual and engages every sense. It’s as visceral and tactile as filmmaking possibly can be. 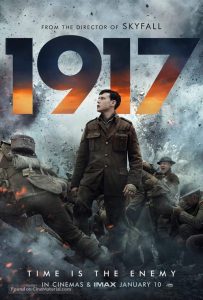 Sam Mendes has captured the harsh realities of trench warfare incredibly well. These include wet boots, divets in the earth from shelling nearly impossible to climb out of, all while under enemy fire, and the practicalities of advancing through ubiquitous barbwire and corpses. In one particular deep and damp hole Schofield leverages his weight on a corpse next to him to get unstuck. His hand goes through the chest cavity like putty. It’s a disgusting moment that ends before either him or the viewer really has time to process it; he has no time to hesitate.

It isn’t all just two men running through trenches and mud under fire. The fictionalised story is full of riveting plot turns and changing landscapes. It doesn’t capture every facet of war but does a great job of showing a little of everything.  It brings to life the poetry and mythos of the great war. Friendship, courage, duty, survival, heroism. Accompanying these grand themes is cinematography that should be a shoe-in for an Oscar. The highlight of the filmmaking comes immediately after the interlude. Cinematographer Roger Deakins (who previously won an Oscar for Blade Runner 2049) illuminates a church yard stunningly well, bringing to life ghost-like apparitions with the shadows of headstones and rubble. It’s almost too good in that it momentarily takes you away from the story.

The acting is phenomenal. Benedict Cumberbatch and Andrew Scott both do so much with their relatively minor roles. George Mackay certainly should be on the shortlist for Best Actor. On top of all the praise I have to personally declare this is one of the only films I have wanted to re-watch immediately after viewing. Much like Saving Private Ryan this will be a war movie which transcends the genre and captivates audiences of all kinds. It’s incredibly advanced filmmaking combined with a simple, powerful story.

1917 is in cinemas from 9th January through Universal Pictures.

Written By
Ben Isbel
More from Ben Isbel
Ben-Hur 2016: Or how I learnt to love Hollywood and stop inevitable...
Read More