In a career spanning over 50 years, Ken Loach remains one of Britain’s most prolific and interesting filmmakers. Fresh off winning the 2016 Palme d’Or with I, Daniel Blake, he returns with another blisteringly angry chronicle of British working class. Echoing through the cinema like the howl from a wounded beast, Sorry We Missed You is among the most powerful experiences of the year.

Ricky (Kris Hitchen) is doing every bit of work he can to help his family. Since the GFC plunged him and his wife Abbie (the delightfully named Debbie Honeywood) into a debt spiral in 2008 they’ve been fighting a financial siege. We meet him interviewing for a job. It’s a simple delivery service, a white van dropping off packages in a constant race against the clock. He provides his own van, the company handles the packages and routes.

Yet this is England after a decade under the Tories, a land of Zero-Hour Contracts, Brexit chaos and austerity cuts. Ricky works with the company, not for it. On paper he’s self-employed, meaning the business can fine him, take a profit percentage, and doesn’t have to provide working benefits like compassion leave or penalty rates. This is the hard north of England. The accents are thick (lots of “Focking ‘ell”) , the cold cuts like a razor, and life in the industrial heart of Britain isn’t easy. As he and Debbie work every daylight hour to try and make ends meet, their family unravels. 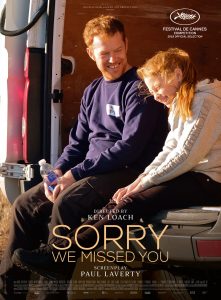 Loach is a filmmaker first and a social campaigner second, yet he finds a way to wrap them together. It would be hard to find a more damning judgement on the rights of the British worker. Anger radiates through every pore of Loach’s filmmaking and if this is what it’s like in modern Britain he has every reason to be. Ricky is nothing more than a modern serf. Poverty is reduced to a Sisyphean cycle; working so he can live and living only to get up work.

Working with his longtime collaborator Paul Laverty, Loach has produced one of the all time great accounts of the working poor. These issues aren’t contained in Northern England, we’re seeing them rise in Australia, the USA and in fact most of the developed world. The gig economy leaves no safety net and ruins any chance of normal family life – especially when Ricky’s teenage son begins to indulge in petty crime. These issues aren’t just about money; it’s a fundamental abandonment of a worker’s dignity. Working 14 days in a row, Ricky is reduced to carrying a plastic bottle with him to pee in, lest he miss a delivery.

Performances are what you’d expect in a Loach film, painfully real and deeply human. In a cast of little known actors, Hitchen and Honeywood prove their talent but Ross Brewster, a Newcastle Policeman by trade who has never acted before, almost steals the show. The self-described ‘Patron Saint of Nasty Bastards’ rules over this company like a mighty feudal baron, until the best written scene in the film reveals him to be just a slightly bigger cog in in this grinding machine. It was a stroke of luck Loach found Brewster because it’s one of the year’s more formidable debuts.

Much like oxygen, sleep and sex, you only appreciate money when you’re running short of it. Loach has cast his gaze on a system that seems designed to dangle money in front of people like a carrot on a stick but stop them from progressing forward, less a glass ceiling but a glass cage. Sorry We Missed You is a heartbreaking experience but it’s a deeply worthwhile one. One of the most fundamentally important and well made films of 2019.

Sorry We Missed You is in cinemas from 26th December through Icon Film Distribution.