Portrait of a Lady On Fire is a period drama so immersive with a story so engrossing it will make you forget you’re watching two women on an 18th century French island. The two leads Noemie Merlant and Adele Haenel both give overwhelming performances. It’s a passionate love letter to the act of falling in love itself.

The romance genre is perhaps the hardest to tell an interesting and fresh story with the countless narrative, songs and art encompassing it. This film captures the initial stage of love as delicately and exciting as any of the preceding texts could.

The story is relatively simple but the emotions complex. Heloise (Noemie) is being forced by her mother into an arranged marriage to a relative stranger from Milan. Making the issue even thornier is the fact it was Heloise’s sister who was initially the chosen daughter to be betrothed. But she chose to end her life by leaping from a cliff rather than go through with the wedding. Tradition dictates that the groom is to receive Heloise’s portrait before the two wed but Heloise refuses to pose for one. Heloise’ mother hires Marianne (Adele) ostensibly to accompany her daughter on walks around the island. This is a ruse so she can instead get a close look at her and paint the portrait in secret.

Celine Sciamma‘s film was the odds on favourite at Cannes for the 2019 Palme d’Or. Ultimately that went to Bong Joon Ho’s Parasite while Portrait went on to win best screenplay. It’s my opinion the jury got the awards mixed up. Parasite was the more interesting and conceptual screenplay. Portrait is by far the better realised and overall superior film. Luckily for Parasite though, it fitted perfectly within the emerging pattern of Palme d’Or winning films. The last five all have themes around social inequality. They are usually tailor made to dissect and analyse. 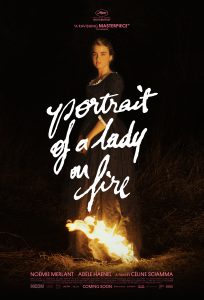 Portrait of a Lady on Fire does have something to say on society’s inequalities (mainly by showing how women flourish without the patriarchy) but is much more akin to the raw passion of human attraction found in films like Blue is the Warmest Colour, The Handmaiden or Call Me by Your Name. So often these gay love stories are so much more revelatory and intensely emotional than straight stories. Perhaps it’s due to the fact straight romances are so often unrealistic and exaggerated Hollywood hogwash ie. every Nicholas Sparks adaption (including The Notebook).

The film’s title is a poetic one. There is a double meaning to it – at one point Heloise’s dress catches alight while at an outdoor social gathering. Yet she is so entranced by Marianne’s gaze she chooses not to immediately extinguish the flames. Fire has long been one of man’s most powerful metaphors. Its potential for both danger and regeneration coupled with its transformative nature has long been mesmerising audiences well before cinema.

Just as Sciamma breathes new life into capturing the tone of budding desire, she likewise breathes new life into the myth of Orpheus and Eurydice. I would be remiss not to mention the engrossing conversation the girls have on the beguiling motives of Orpheus and the hypothetical actions of Eurydice. The Greek tale is self referenced again much later in the film in a beautiful and achingly sad moment.

This is an incredibly passionate, moving portrayal of first love made all the more intense by the knowledge that the girls’ budding feelings for one another can only exist in the one time and space. The cherry on top is that the final scene is also one of the film’s most powerful. Expect this to resonate with you long after the credits roll.

Portrait of a Lady on Fire is in cinemas from 26th December through Madman Films.

Written By
Ben Isbel
More from Ben Isbel
Desolate and stark, Logan is a superhero flick unlike many others. In fact...
Read More