I always try to go into a screening cold, but sometimes it’s impossible to ignore the noise around a film. Taika Waititi‘s latest is one of those films, seemingly loved and hated by critics in equal measure. This is one of those times when I can’t see both sides. Jojo Rabbit is certainly not the biting “anti-hate satire” that the marketing would have you believe, but I cannot understand the vitriol that some have thrown its way.

Jojo Rabbit is another of Waititi’s coming-of-age stories (after Boy and Hunt for the Wilderpeople), about a lonely kid looking for connection, for his place in the world. But it just so happens that this time the kid is a fanatical Nazi whose imaginary best friend is Hitler. Waititi’s intention is clear from the start when he overlays Beatlemania-esque images of children heiling Hitler with a German version of the “I Wanna Hold Your Hand” – subtlety is not high on the agenda. That’s mirrored in Waititi’s appearance as Hitler, a clueless caricature full of anachronisms and pep talks for his “bestest little Nazi”. Ten-year-old Johannes “Jojo” Betzler is exquisitely brought to life by newcomer Roman Griffin Davis in one of the best performances by a child actor in a long time, with perfect comic timing and an uncanny ability to show depth, emotional growth, and the struggle in growing up. 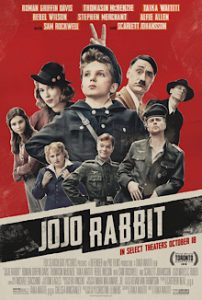 Jojo is desperate to know all the skills to be a solider in the German army – like burning books, using daggers, spotting Jews – and he heads to a Nazi training camp for kids, which Waititi shoots with an ironic version of the cheery wamth of Wes Anderson’s Moonrise Kingdom. After he’s taunted by the older kids for not being the true killer and given the titular nickname, Jojo’s attempt to prove himself ends up with a grenade explosion and his war dreams replaced with scars and a limp. This slapstick first half is followed by something much more layered as we get deeper inside Jojo’s point of view. We spend more time with Jojo’s mother Rose, a surprisingly complex while also playful performance from Scarlett Johansson, who’s scared for the country and the son she’s lost to zealotry. Her attempts to bring him back are less effective than the transformation he slowly undergoes with the discovery of a young Jewish girl his mother has hidden behind their walls (an excellent Thomasin McKenzie as Elsa). Initially scared and horrified as he’s been taught to be, Jojo then sees it as another chance to serve Hitler and learn more about Jews. But we witness the growing cognitive dissonance that exists within his indoctrinated young mind and he’s forced to reckon with what he’s thought to be true. Eventually Jojo goes to more conventional places than the initial shock value of the premise would have indicated, but there’s power in the relationship between Jojo and Elsa, his growth of empathy, and in mockery of the tyrannical.

That dissonance exists for the movie too – Nazis can be both ridiculous and dangerous; it can be both flippant and serious. That’s a line that I think Waititi balances, while indulging his inclination to switch tones as suits the scene. But maybe the film’s harshest critics think its cartoonish, buffoonish depiction of Nazism in an idyllic 1940s Germany trivialises the true atrocities that lay beyond the pastel coloured village walls. And that refusing to look them directly in the eye diminishes them. But I think the key here is that our eye is Jojo’s eye. It’s an absurdist farce that looks at an ugly, confusing world through the eyes of a child, a child who’s untethered by the war and looking for something to grab on to, to belong to, and is seduced by the camaraderie of National Socialism, only to have its ridiculous and pernicious nature revealed. It’s really focused on the hopeful idea that love can overcome hate; that fascism and white supremacy are stupid ideas that can (still) be overcome – let’s just hope that it wont ultimately prove to be naive.

Jojo Rabbit is in cinemas from 26th December through 20th Century Fox.