For the third time in under forty years film fans are sitting down to watch the end of a Star Wars trilogy. The ninth and final film in the Skywalker Saga finds itself in the unenviable position of trying to wrap up the story of Disney’s trilogy but navigate the shaky narrative and cultural ground The Last Jedi left in its wake. The result is a very mixed bag. Even by this trilogy’s uneven standards, J.J. Abrams’ return to a galaxy far far away is mired in a combination of creative gridlock and nostalgia baiting. This isn’t the worst Star Wars film, but it’s by far the most forgettable.

After half a decade of build-up, speculation and hype, it’s become clear that Disney didn’t have a grand plan. There’s hardly any continuity in theme and tone. Each film in this trilogy feels like it was made with a different creative vision, by different filmmakers looking to achieve very different things. Force Awakens was the film equivalent of a cover band playing your favourite song, The Last Jedi was an ambitious mess dotted with moments of sporadic brilliance, and Rise of Skywalker wraps it up by going on a backwards sprint around familiar territory, throwing in big new plot points and retconning as it goes.

As the conflict between the decimated Resistance and the First Order continues, the galaxy is shocked when a voice recording of the long dead Emperor Palpatine (Ian McDiarmid) surfaces. Fearing a threat to his appointment as Supreme Leader, Kylo Ren (Adam Driver) goes on a search to track down the legendary Sith home world while Rey (Daisy Ridley) continues with her training. 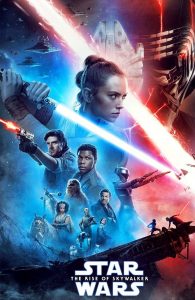 Say what you will about The Last Jedi, at least it tried something new. Rian Johnson’s loved and equally loathed middle entry is a particularly tough act to follow, but at least it was confident enough to show fans things they hadn’t seen before and had enough subtext to chew over. Rise of Skywalker drives in the middle of the road. It’s not a bad film, it’s just hard to escape the feeling that we’ve seen all this before, and some of the new plot reveals are eye-rolling. The prequels proved that bigger doesn’t equal better. While the special effects and the cast list are massive, there’s a serious lack of any emotional backbone.

It’s not all bad of course. The cast do their best with what they’re given, but when they’re working with a script that went through five writers including original director Colin Trevorrow and Batman V Superman penman Chris Terrio, it’s hardly surprising it feels lacking. Ridley is still an excellent leading lady and although the highlight of the last two films Kylo Ren is wasted, Adam Driver can still do no wrong. The standout best new addition is Richard E. Grant, who plays First Order General Pryde with a snide superiority that would made an Imperial Officer in the original trilogy proud.

Writing as a massive fan who grew up a hopeless Star Wars addict, the sadness isn’t in the film itself – all things considered it’s an enjoyable if unexciting ride – it’s the brand as a whole. At this stage Star Wars is just another beloved series that got rebooted to cash in nostalgia dollars and has been stretched too thin. It’s one of the steadily growing list of franchises from the late 20th century that now has more mediocre films than good ones in its repertoire. Star Wars simply isn’t special anymore.

So this is it. Our epic nine film, 42 year journey ends not with a bang, but with a whimper.

Star Wars: The Rise of Skywalker is in cinemas from 19th December through Disney.