Released in 2014 after five years of full time investigation, the ‘Senate Intelligence Committee Report on CIA Torture’ or simply ‘The Torture Report’ was an almost 7,000 page behemoth that went into excruciating detail about the CIA’s horrific treatment of prisoners. After a career of producing and screenwriting (An Inconvenient Truth, Contagion, Side Effects) Scott Z. Burns takes his turn in the director’s chair for The Report, a darkly fascinating peek behind the bureaucratic curtains of how this landmark document was written.

The report owes its existence to one man: Daniel Jones (Adam Driver), who transferred his career path to the intelligence community the day after 9/11. Jones spent almost every day for five years researching and writing the incendiary document, which upon release was turned into a political football as both sides looked for a way to blame each other. Senator Dianne Feinstein (Annette Bening) commissioned it while Obama’s Chief of Staff Denis McDonough (Jon Hamm) navigated the political landscape.

Steven Soberbergh produced this excellent political thriller, which does for Daniel Jones and the CIA what Spotlight did for the Boston Globe and the Catholic Church. The subject will be familiar to anyone who has seen Alex Gibney’s masterful documentary Taxi to the Dark Side, which gets into similar territory, although with the gift of hindsight (Taxi came out in 2007) The Report has a much larger scope to work with. Viewers of the excellent series The Looming Tower will also be familiar with Ali Soufan, a real life FBI agent who appears here, albeit played by a different actor.

The details of what happened under the CIA are horrific. Absolutely hideous. Burns doesn’t slip into sensationalism; the facts speak for themselves and the calculated, clean filmmaking pairs beautifully. This is a film of people sitting, learning and writing. It’s an absorbing and educational exposé of post-9/11 America that’s as cold and sharp as a scalpel, and leaves cuts like one too.  I can count on one hand how many films have legitimately given me nightmares and this is one of them. 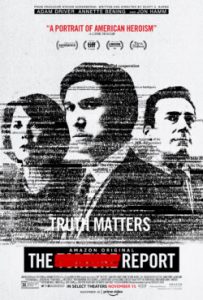 “Enhanced Interrogation Techniques” – a piece of newspeak that Orwell would have been proud of – is how CIA dubbed torture. Contractors developed techniques meant to induce learned helplessness, mentally breaking down any suspected terrorist it was used on – ‘suspected’ is the key word there. Stress positions, sleep deprivation, confinement boxes (mock coffins that prisoners were nailed into that contained insects) and famously waterboarding were used in blackspots around the world. The scenes depicting the latter are horrifying.

Burns picks his targets carefully. The entire CIA apparatus is damned as not only allowing this but finding legal loopholes to make it happen – upon its release Senator John McCain delivered a 15 minute speech berating the organisation. Interestingly it also takes aim at Katherine Bigelow and Mark Boal’s Zero Dark Thirty – which implies that torture led to key intel in finding Osama Bin Ladin – an idea that is comprehensively dismantled by Jones and his findings.

In the final analysis, all this sordid chapter accomplished was a batch of bad intel, as detainees usually just say what their interrogator wants to hear to make it stop. It also created the greatest propaganda tool imaginable for terrorist organisations, who now have dozens of martyrs to pick from and rally around. Around half of the 120 detainees were later found to be innocent.

‘History is written by the victors’ claims the popular if untrue and chronically misquoted saying. Despite your own opinions on torture and its usefulness, The Report leaves the viewer with the sobering fact that, within our lifetimes, the CIA helped start an illegal war, tortured people, committed war crimes, and then lied about it. Sections of the US government did things the Nazis did, then tried to erase it from history. Not a single CIA operative faced legal action over this policy, one that we’re still yet to fully appreciate the disastrous effects of. Few films will be more important this year than The Report.


The Report is in cinemas from 14th November through Transmission Films.

Written By
Simon Storey
More from Simon Storey
All credit to 20th Century Fox. Any studio that opens an animated...
Read More