“I am no bird; and no net ensnares me: I am a free human being with an independent will”. So responds the titular Jane Eyre, held up today as an icon of feminist literature, to her suitor Mr Rochester upon his proposal of marriage. Fans of the novel know she later goes on to marry Mr Rochester anyway and be both in opposition to and a participant in the institution of marriage. Given modern disseminations of marriage and what it means, filmmaker Em Baker was inspired by this notion during the marriage equality plebiscite to explore modern marriage through the stories of four very different women all connected by marriage.

Benay lives in Turkey and sees her pending nuptials as the beginning of a new family, something she feels she lost when her mother died when she was a child. Luthanlu lives in a tribal minority in Northern India and as the oldest of many children sees marriage as a way to continue her Rongmei Naga culture. Anna lives in Australia and her life is imbedded in her church. She sees marriage as a union between herself, her partner and her God, and a step toward losing her virginity. And Dalia lives in Mexico City with her American girlfriend and sees marriage as validation of her relationship, and a chance to reconcile with her religious conservative mother. 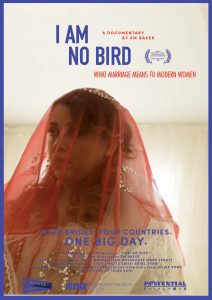 Baker’s history working in visual effects on huge Hollywood blockbusters such as Mad Max: Fury Road and The Wolverine have trained her eye in visual story telling. Presenting the distinct stories of four such different women and forming them into a singular cohesive story of marriage is an extraordinary feat. I Am No Bird captures the emotional complexities of each woman on her journey down the isle, and the beauty of simplicity. For Dalia in particular this is a complex journey to cement love, find family and forgiveness, while struggling with her faith and an identity at odds with what she was taught as a Catholic. But at the heart of her marriage is love, and the little moments between the two brides are so tender and beautiful.

For Luthanlu on the other-hand, the wedding, and indeed the marriage itself, are a performance of her duty to her family and her community. She speaks only of her community, her faith and leaving her family, her husband to be appearing briefly at the beginning of her tale and then not again until her wedding day when she appears to smile only briefly when her dowry is handed over.

A lot of the emphasis of the film, despite its view of looking at a modern relationship with marriage, falls heavily on faith and religion and the role this plays in modern marriages. But as a film about the different interpretations of marriage in the 21st century, produced during one of the biggest conversations our country has ever had on the issue, I Am No Bird succeed in showing the beauty, institution, claustrophobia and love that marriage, wherever it occurs, looks like today.

I Am No Bird is in cinemas from 14th November through Potential Films.