A Pedro Almodovar film can be a little like an amusement ride down a dark tunnel. Will it be romantic? Titillating? Kitsch? Enthralling? The Spanish auteur creates his most personal film full of his idiosyncratic flourishes in Pain & Glory. It’s a meta exploration of his early life growing up, contrasting with his established slightly stalled career. It’s both reminiscent and inspired by Fellini’s 8 ½.

Antonio Banderas is the film’s protagonist, Salvador Mallo, a director whose career loosely mirrors Almodovar’s. Be prepared to know him intimately through Banderas’s powerhouse performance and Almodovar’s brutally honest examination of his quasi self. It’s a character that won’t leave you until long after viewing. Deservingly, Banderas took home best actor at Cannes.

Salvador has a story of two halves to tell the audience. The first is his present day self. The respected director is suffering from creative writer’s block, connected to an accumulation of emotional and physical ailments. Confined to a discontented existence, Salvador consciously and unconsciously reflects on his childhood in Spain, specifically memories connected to his mother (Penelope Cruz). The film drifts seamlessly between the boy and present day Salvador. Banderas’s sensitive narration and portrayal is an examination of his character’s soul as visceral and honest as a text can be.

The film begins with present day Salvador being asked to attend a commemorative event for one of his earlier films. From this he reconnects with the star actor of the piece, Alberto (Asier Flores). The two share a difficult history and haven’t talked for the two decades since the original release. While reconnecting with Alberto in his modest villa he takes his first ever hit of heroin. The heroin soon becomes a habit. Both the drug and the character of Alberto will frequently reoccur within Salvador’s life. Without the full context behind their relationships it is initially hard to really get into the story. It isn’t until very deep within the film that those two elements pay dividends for the dramatic narrative. 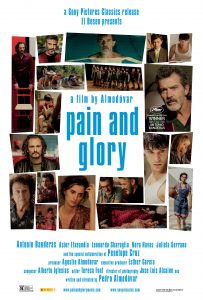 The other half of the story which is much easier to delve into concerns the memories of the child Salvador. Salvador first begins reminiscing on his young life during his heroin hazes. Later these recollections will also occur during dreams, giving the film a fanciful quality and connecting the two stories immaculately. Banderas narrates throughout the sequences of his young self, the action and narrative reflection overlapping gently and pleasingly. These vignettes are visual poetry. The cinematography is exquisite, almost on par with the sumptuous Call Me by Your Name, also set in the Mediterranean.

The contrast between the adult and childhood Salvador reveal the true meaning behind the film’s title, Pain & Glory. Tied within the impoverished childhood is an innocence, beauty, familial love and great potential. The grown Mallo, who has lived up to that potential is now suffering an existential crisis. There is a malaise accompanying the grown man, despite his success.

Don’t expect to be gripped from minute one. This film certainly belongs in the slow cinema movement. As Almodovar drip feeds extracts of Salvador’s childhood the viewer can’t help but be drawn into Salvador’s present day life. Adult Salvador also has secrets and relationships to reveal to the audience that would not have the same emotional punch without his childhood background being unveiled simultaneously – a re-connection with a past boyfriend, long poignant conversations with his frail and elderly mother.  The strong mother relationship and the conversations are typical for an Almodovar picture. The two are full of selfless and selfish love for each other and the colloquy they share is relatable and universal.

The last scene of the movie is a thing of genius on the same level as the curtain reveal in The Wizard of Oz. Flirting with the fourth wall, it’s a masterstroke of ingenuity that ties both halves of the story together. What starts as two distinct films slowly converges into something that, coupled with the autobiographic nature of the piece, transcends any typical cinematic biography. Expect the common themes from Almodovar’s films to resurface, and it’s lovely to see his frequently called upon Cruz and Banderas shine. Time will reveal whether this will be considered the director’s magnum opus, but it isn’t too much to say this is certainly his most quintessential film and a remarkable achievement.

Pain & Glory is in cinemas from 7th November through Universal Pictures.