Written and directed by Paul Downs Colazzio, and inspired by his roommate, Brittany Runs a Marathon is a perfectly likeable story about that tumultuous time at the end of your twenties when you finally settle down and find direction. Tobey Maguire (the first Spider-Man) produces this pleasant film, and while it’s predictable and clichéd it gets away with it on the strength of Colazzio’s – a published playwright- script and Jillian Bell’s performance.

Brittany (Bell) is living fast and hard in New York City. Overindulgence is the name of the game; be it drinks, food, sex or Adderall. As thirty fast approaches the seeds of an existential panic are growing. Those around her, like her roommate and BFF Gretchen (Alice Lee) seem to be accomplishing things while her life is a vicious cycle of unhappiness and short term cures. As her doctor advises her to lose weight she decides it might be time to face the crisis head on. A simple run around the block is how it starts, the end goal is almost unattainable: in a year she’s going to run the New York City marathon. 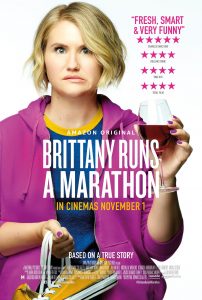 There seems to be a growing trend of films about accepting your place in society and doing your best with it – I’m going to call it ‘iPhone Existentialism’. Recent films like Tully and especially Brad’s Status tackle mid-life crisis with the perfect dose of pathos, and although it’s aimed at a slightly younger demographic, Brittany Runs A Marathon is an empathetic look at the quandary of your mid to late 20s. It’s that weird time where there’s plenty of sand left in the hourglass but you have your first taste of the sting of time.

It couldn’t have been an easy decision for Jillian Bell to take on this role. There’s no vanity here. The film makes her body the centre of attention with her weight and appearance being repeatedly commented on. Making the film must have been a very personal journey as she lost almost twenty kilos during filming. This is Bell’s first main role after a number of supporting work in comedies, and although her character can be at best annoying and at worst unreasonably cruel, there’s depth to this performance she should be proud of.

“The human spirit knows no bounds” announces the Mayor of New York at the starting line. This is the actual speech, as the cast and crew were allowed to shoot during the New York Marathon, the first time a non-documentary was given permission to do so. While there’s a few too many subplots and characters and it’s all a bit schmaltzy, the final 20 minutes are truly moving. It’s a moment of genuine tears in eyes, fist in the air filmmaking that’s worth the price of entry. Just like its main character the film pinballs from one emotional extreme to another, but in the end the lovable qualities shine through.

Brittany Runs a Marathon is in cinemas from 31st October through Transmission Films.