There’s a scene in the first season of Lost where two main characters find their friend Charlie hanging from a tree. Jack, who is a doctor, tries to perform CPR. Despite repeated attempts at resuscitation he can’t bring him back. With hope lost and blind panic setting in Jack starts yelling and punching Charlie’s chest. Tears streaming down his face, he lays punch after useless punch into that cold, dead body, hoping it will restart his friend’s heart if he tries hard enough.

That scene has nothing to do with Terminator: Dark Fate, but while watching the sixth film in this series I couldn’t stop thinking about it. It’s the perfect metaphor for what Hollywood has been doing to this poor franchise since 1991; punching it over and over again, hoping that one of their attempts will miraculously bring it back to life. Terminator: Dark Fate is no less than the third film that markets itself as ‘the third in the trilogy’ after Terminator 3 and Terminator: Genisys. While it’s not quite as bad as the other two – few films are – Tim Miller, fresh off a win with Deadpool, attempts to punch the life into this ailing franchise with another big, loud, bloated Hollywood mess. It’s a pale, depressing imitation of the infinitely better films that came before it.

In terms of series revival it is in the same ‘Soft Reboot’ territory as The Force Awakens. It has essentially the same plot but it’s just different enough to pretend like it’s telling its own story, and just like Force Awakens most of the original cast have returned.

Three years after stopping Judgement Day in Terminator 2 – the film overlooks all previous films since T2 and hopes you do too – Sarah Connor (Linda Hamilton) and her son John (a horrible CGI version of 14 year old Edward Furlong) are on holiday in Guatemala when another Terminator emerges from the ocean and kills John Connor. Skip ahead 30 years to Mexico City,  and auto-factory workers Dani (Natalia Reyes) and her brother are doing their best to earn enough money to emigrate to the USA. 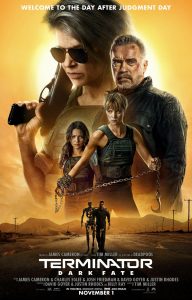 Two figures come from the future – one for the purpose of terminating her (Gabriel Luna, whose character is a mix of a terminator and Venom), the other to protect her (Mackenzie Davis). Their chance of survival rests on the help of older Sarah Connor, who has been hunting terminators for over thirty years, and the return of the original terminator (Arnold Schwarzenegger) who now goes by ‘Carl’ and lives in Texas. I won’t spoil what Schwarzenegger’s backstory is but suffice to say it’s officially the dumbest thing that has ever appeared in any Terminator film*.

With the three most important people returning: Hamilton, Schwarzenegger and James Cameron – who produced and is one of five people with a story credit, presumably what he did with the two hours he wasn’t busy making Avatar sequels – how this turned out so bad is baffling. Three attempts at this material have all made exactly the same mistake. The first two films worked because they put serious effort into relatable human characters and interesting story, alongside innovative action and some of the greatest special effects of all time. Many forget that the first film is a rather sweet love story, alongside the killer robot shenanigans, and T2 is still one of the finest action films ever made.

Dark Fate with its messy, over-edited and overlong action is everything T2 was not. Is it just me or are special effects getting worse? The first scene has the worst de-aging effects since Rogue One, with faces that look like they’re made of candle wax. None of the new human characters are interesting or unique and apart from bringing a welcome new sense of diversity, with some particularly on-the-nose political subplots, Dark Fate does nothing new.

Performances are boring reiterations of characters we’ve seen before. Scenes without explosions are kept to a minimum and despite bringing back Linda Hamilton to her most iconic role the film gives her almost nothing to do. The music which drones over every single action beat could be pulled out of any recent blockbuster. If there’s a silver lining it’s Mackenzie Davis, who’s starting to build an interesting career path, and it’s clear that Schwarzenegger is becoming a much better actor with age.

Dark Fate isn’t the worst of the Terminator films but it’s by far the most depressing. Is this really where mainstream Hollywood is at right now? Throwing talented people at unoriginal CGI clusterfucks indistinguishable from any other late year blockbuster? The legacy and lore of another beloved franchised is being ruined by getting strapped to the Hollywood milking machine. Terminator, now more than ever, sits alongside Alien, Predator, Jurassic Park, Ghostbusters, Die Hard and to a lesser extent Star Wars as beloved series that Hollywood has failed to hit back to life. People’s nostalgia is being repackaged then spoon-fed back to them in the most cynical media landscape imaginable.

Dark Fate… For franchises it certainly seems to be.

*That’s including that part in Genysis when the characters have to invent a time machine so they can go 30 years into the future to stop a Skynet attack. Even though they could have just… waited. BECAUSE THAT’S HOW TIME WORKS.

Terminator: Dark Fate is in cinemas from 31st October through 20th Century Fox.

Written By
Simon Storey
More from Simon Storey
David Lynch: The Art Life is everything that the filmgoing community has...
Read More