Clusters of orange lichen-covered roofs, peeks of sandy beach, and ocean spreading into the distance. Gull cries mixed with the slap of waves against the hull and the sound of conversations spilling out of pub door and across the harbour. Tight tangled streets tumbling down hills to paths edging rugged green cliffs that drop to deep dark waters. These are the images of Cornwall that fill my mind from endless childhood summers spent running along its beaches, and so any film set there is already going to have positive associations for me. But even without that connection, Fisherman’s Friends is likely to leave you feeling all warm inside, like you’re wearing a big woollen cable knit fisherman’s jumper.

Building on a heritage of British music comedy films based on true stories (the likes of Brassed Off), and a Cornish heritage of family, community and song, Fisherman’s Friends is a sweet, wholesome movie, imbued with the spirit of cheeky British humour and bound to leave you with a smile on your face. Sure there are holes you could pick, but this really is the type of film where its heart is so in the right place that you think, why would you? It feels so clichéd that it could only be true, but with extras like a love story and money troubles thrown in for dramatic tension. 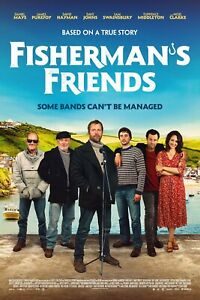 Danny, a music executive from London (Daniel Mays in a nice to see unlikely-looking lead role) finds himself in a tiny Cornish village for his friend and co-worker’s stag do. When some planned sailing gets cancelled they hang around the harbour and come across a performance by a bunch a local men (including James Purefoy as Jim, the nominal leader) who, when they’re not out fishing, sing traditional sea shanties (think “What should we do with the drunken sailor”) for the locals. Danny’s boss (Noel Clarke) tells him that he loves the music and leaves him behind saying that he shouldn’t come back until he’s signed them up. It’s not until Danny has worked the group and all the angles to convince them, given them his word that he’s serious, that he finds out he’s been set up and it’s all been one big joke. But by then he’s already been seduced by the Cornish landscape, the way of life, and just so happens to be intent on seducing one of the locals too (Tuppence Middleton as Alwyn, Jim’s daughter). They laugh at him in London and he falls out with his work, but he starts to see the real impact of the music and goes all out to prove everyone wrong and get these guys a record deal.

While the story’s great in truth and interesting, it’s heaped with clichés – coincidences, sad montages, rushes to make it right at the end, finishing on a kiss – and the direction by Chris Foggin starts off unconfident. Scenes are edited too choppily and the cinematography doesn’t make the most of the special light that Cornwall has. But as it goes on both the cast and the filmmakers seems to grow in belief. The film pleasantly washes over you like waves on the shore, the performances welcoming you in, and the music – the crux of the whole thing – hits deeper than you might expect.

Charming, funny, a more than pleasant way to spend a couple of hours, Fisherman’s Friends is comfort filmmaking.

Fisherman’s Friends screens as part of the British Film Festival from 30th October to 24th November.

Written By
David Nagle
More from David Nagle
Thousands of words can be exhausted on what's wrong with superhero movies...
Read More