They were so preoccupied with whether or not they could, they didn’t stop to think if they should. That’s the thought I couldn’t drop while watching Gemini Man, and not because it’s peripherally interested in the ethics of human cloning. Instead it’s because this – the latest attempt to get Will Smith back to the kind of box office and semi critical success he enjoyed as an action lead in the mid-2000s – is being hailed as its own kind of technological advancement, with no thought to how it actually plays out in reality.

Shot at a rate of 120 frames per second (the standard is 24 fps) and displayed at 60 fps in 3D, director Ang Lee is touting watching Gemini Man as like watching real life. But we’re not here for real life; we’re here to see a film, to be pulled into a different world. Instead it’s like watching something shot on a mobile phone, or a blockbuster film on your TV that looks like an episode of Days of Our Lives thanks to ‘motion smoothing’. The effect – hyperreal, uncanny, strangely flat – is something that filmmakers like Tom Cruise and Chris McQuarrie, Edgar Wright, Rian Johnson, James Gunn, Paul Thomas Anderson, and Christopher Nolan have petitioned against. But here it’s embraced without considering how the filmmaking itself has to change if told at a higher frame rate, without a consideration of the years of conditioning we’ve had to how movies should look. It doesn’t make the action any easier to see than a regular 3D conversion (concerns like that should be solved through shot choice and composition, not frame rate, anyway) and has the effect of making the performances feel flat and pedestrian. While a motorbike chase through Cartagena and a catacombs brawl showcase Lee’s undoubted talent, the rest of the action scenes have the look of behind-the-scenes documentary footage. Maybe it’s railing against the changing tide, just like some did with the move to digitally shot films in the first place, but on this evidence there’s a long way to go for high frame rate cinema to be acceptable. 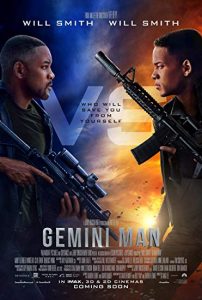 It doesn’t help Gemini Man’s cause that the rest of the film is a mess too. Since it was first sold back in 1997, the script has passed through many stars’ hands, with most going on to make better or funner versions of a similar concept. Multiple revisions of the script don’t seem to have resulted in any improvement in the leaden dialogue or given any depth to the characters. In a post-Jason Bourne, peri-John Wick era, Will Smith’s international assassin – who’s just thinking about retiring after decades and 70-plus kills because he’s not really feeling it anymore – isn’t really going to cut it in the killer-characterisation stakes. He then seems only mildly perturbed when he’s pursued by a younger clone of himself when his government turns on him. While the de-aging technology is impressive, having two Smiths on screen only highlights that he’s lost his ability to hold the screen like he once did, especially when the digital Smith looks curiously lightweight and off-puttingly animated in some scenes. Meanwhile Clive Owen has gone from leading man to the kind of scenery-chewing villain that could be played by anyone, and Mary Elizabeth Winstead is totally wasted in a support role where she just goes around saying things like how good of a guy the lead is.

Gemini Man could have been some high concept action sci-fi fun like Face/Off or Demolition Man. Instead it’s a bland, tax break-driven continent hop that’s too hung up on the technology to remember all the other things that make a film tick.

Gemini Man is in cinemas from 10th October through Paramount Pictures.

Written By
David Nagle
More from David Nagle
A man willing to lay down his life to save those around...
Read More