In French ‘souvenir’ means ‘to remember’. Joanna Hogg’s latest film – executive produced by none other than Martin Scorsese – seems to embrace both the French and English meanings of the title. It’s a film of memories, the tiny inconsequential moments we remember when we look back on the past. Yet it also seems like the film itself is a souvenir. Based on Hogg’s own experiences, this elegiac look back at 1980s Britain is the kind of work that only years of quiet reminiscing can craft. It’s a beautifully cut piece of personal reflection that she has brought back from the world of her youth.

Honor Swinton Byrne is Julie, a young woman trying to find her voice in film school. Her first taste of adult independence has left the kind of aimless wandering that a youth of privilege often leads to. Life for her is a series of friend hangouts and staring aimlessly at a typewriting praying for inspiration to strike. It’s a transitional period, both in her life and society’s. Around her Thatcherism changes the very nature of Britain and the Irish insurgency reaches scary new heights.

This lifestyle leads her first into bed and then into love with Antony (Tom Burke). Antony is a gentleman several years her senior whose purpose in life appears to be chain smoking and spending other people’s money (both this and Midsommar seem to be tapping into the wider zeitgeist, as asshole, gas lighting boyfriends are the arthouse flavour of the month). As Antony’s heroin habit begins to spiral out of control their relationship, just like the needle marks in his arm, begin to turn toxic. 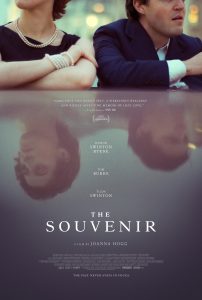 In her first leading role Honor Swinton Byrne – daughter of Tilda Swinton and playwright John Byrne – makes one of the most assured debuts of the cinematic year. The story goes that she was cast just weeks before filming after a chance meeting at the Swinton household. Hogg, who has known Tilda Swinton since they were ten years old, couldn’t have cast a better actress in this role. She’s a revelation. Both mother and daughter share a truly wonderful on-screen relationship. The acting gene must be strong in the Swinton family because it hasn’t skipped a generation.

Honor’s face has a soft innocence that the camera loves to linger on. It’s the perfect companion to Hogg’s filmmaking with its habit of long, languid takes that wring every detail out of these naturalistic performances. The camera rarely moves, it simply sits and observes and lets these characters tell us their stories amid some truly beautiful photography.

All the intimate little moments of life are here; the awkward political discussions over Sunday lunch to the quiet wonder of exploring someone’s body for the first time. As this relationship slowly but inevitably falls apart the heartbreak is palpable. After getting to know these people so intimately some scenes are particularly painful to watch. The first cut is the deepest and in recreating this period of her life it seems like Hogg’s hasn’t entirely healed.

While the occasional dips into pretentiousness might turn some viewers away, and at two hours Hogg’s languid style of filmmaking does begin to test patience, for those who are happy to embrace this ambitious film the rewards are rich indeed.

Joanna Hogg is one of Britain’s most unique filmmakers. Those willing to let themselves be swept into this quietly powerful experience will find one of the best realised pieces of cinematic art of the year. At the very least we can thank Hogg for introducing the world to the depths of Honor Swinton Byrne’s talent. After this we’re sure to see more of it.

The Souvenir is in cinemas from 3rd October.

Written By
Simon Storey
More from Simon Storey
Based loosely on the 1974 cult hit of the same name which...
Read More