Scary Stories to Tell in the Dark is a film adaptation of the bestselling cult book popular with children and adults alike for the last few decades. Set in Pennsylvania in 1968 the story is loosely based on a select few stories from the source material, interwoven through a narrative involving four outcast teenagers. It lives up to some of its high potential but for the most part fails to frighten.

The film is directed by  André Øvredal (Troll Hunter, The Autopsy of Jane Doe) but unarguably the biggest name attached to this is the producing and screenplay credit of Guillermo Del Toro. Rather than going with an anthology approach to the shorts the writers have chosen to incorporate a narrative. It’s a riskier approach and one that doesn’t truly pay off.

In terms of storytelling it’s a little forced and clunky. There is one awful tagline thrown out early on that stands out – ‘You don’t read the book. The book reads you!’ It’s gratingly clear that everything within the story is being reverse engineered around the fate of the four characters. It would have been much crisper and smooth-lined to go with a true anthology with breaks and different characters and actors. The attempts to keep the audience engaged with the characters’ fate never truly works, probably due to the PG 13 rating limiting the stakes of what really could go wrong for them. The consequences are very limited and the blood and guts are mostly suggested. No excuses really should be allowed here on why the terror never strikes. The source material worked great as imaginative horror for both kids and adults. 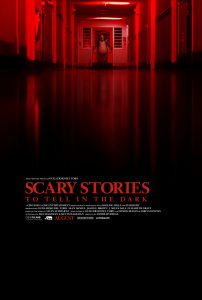 The four ‘children’ played by young adults are commendable in varying degrees. The lead, Stella (Zoe Margaret Colletti), does alright as the young horror aficionado burdened with emotional trauma. The stand out is Austin Zajur as Chuck, who is essentially Shaggy from Scooby Doo meets Gaten Matarazzo from Stranger Things.

The scare factor targets a niche age audience. It’s a horror octave or two above Goosebumps but several below Trick ‘r Treat. It’s a tame mix of the two, with a muddled anthology approach of the latter and childish level of fear of the former. It’s a bit too grown up for pre-teens and too tame for late teens. However, I expect it to be a childhood nostalgia favourite for those within the sweet spot age range. It certainly does have its merits. The imagery in particular is what lives up to the level of the source book most; it’s famed for its illustrations. The monsters and ghouls featured are truly magnificent creations of nightmare fuel.

There are flashes of brilliance here and there but ultimately too many weaknesses. The narrative falls apart the more you pull on the threads. The adults’ and parts of the kids’ lives are too one-dimensional. And as for the great non-corporeal spook itself behind all the scary events, she is perhaps the greatest letdown in the screen play for a myriad of reasons, backtracking frequently with motivations that are beyond befuddling. There’s also a clunky plot involving the Vietnam war, Nixon and an uncomfortably forced sequel teased at the end. No monsters (no matter how unique or terrifying) make up for the shortfalls here.

Scary Stories to Tell in the Dark is in cinemas from 26th September through Universal Pictures.

Written By
Ben Isbel
More from Ben Isbel
Underwater is a sci-fi horror set deep deep down, in the depths...
Read More