Regardless of your views on the horse racing industry, Michelle Payne’s story was always going to be a movie. Tragedy, injury, humour, small-town girl making it on the big stage in the sport of kings. Rachel Griffith’s coming-of-age take on the first female jockey to ride a Melbourne Cup winner seemingly has all the ingredients to stand alongside classic films of The Castle, Crackerjack and The Dish about unlikely people making big waves. And while Ride Like a Girl may not quite join those ranks, it is still a big-hearted film that ably balances the big notes and the small.

For all its focus on the triumph that culminated in Payne gleefully telling the doubters to ‘get stuffed’, this is not so much a feminist film as a story about father and daughter. Ultimately it all comes back to family – fitting then that Stevie Payne is along to represent himself. Ride Like a Girl could easily have been a film dedicated to flipping the bird to a sport that constantly told Payne she couldn’t amount to anything, and to a degree it is, but it would be misreading the moment and Australians’ memory of it to shade it with bitterness. Griffiths opts more to focus on the individual through the prism of strength: strength to cope with losing a sister, one of nine siblings, to a race fall early on in life, growing up without a mother, overcoming a crippling spinal injury after a race fall of her own, and of course leaving the comfort of home and her dad Paddie’s protective eye and make her case for greatness. 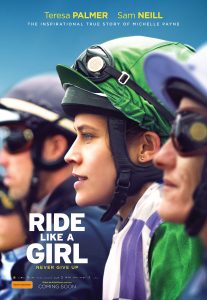 Of course the Melbourne Cup is the obvious core to this narrative, but by the time that event comes to pass, such is the affection that Griffiths has built for this large, hard-working family that it would hardly matter if Michelle Payne (Teresa Palmer) hadn’t won at all. Screenwriters Andrew Knight and Elise McCredie evoke humour and pathos in equal measure through the Payne family, a large often unruly mob supporting a loving but stubborn father struggling to cope. And in Teresa Palmer, Griffiths has found a more than adequate lead to carry the load with cheer, grit and vigour. She apparently did much of the riding, bar the adrenaline rush for the in-close race scenes, and the results are exciting in their chaos and breathlessness. Palmer and Stevie, who is a consistent source of moral support and comic relief, have an infectious chemistry throughout, but it is the strained bond between Paddie (Sam Neill) and Michelle that carries this film forward, with Neill cutting a stoic figure.

Perhaps detracting from this film’s story for those who know their racing well is the backstory to the Cup-winning stable that has developed over the past year. Prince of Penzance was trained under Darren Weir (here portrayed by Sullivan Stapleton), who would eventually yield to Michelle’s conviction and give her the ride in the race that stopped the nation in 2015. While that name was revered at the time, recent allegations of ‘jiggers’ (devices designed to give horses an electric shock for pace) and cocaine being found on his property out near Ballarat may throw a shadow over such a rank outsider victory.

It’s an unfortunate distraction, but from the way this poignant, funny and warming film is told, the journey that Michelle embarked on from a young child dreaming of a Melbourne Cup ride need not be tainted by another man’s failings. It was an inspiring moment, and it will be remembered as such.

Ride Like a Girl is in cinemas from 26th September through Transmission Films.

Written By
Angus Tonkin
More from Angus Tonkin
Luchino Visconti’s 1943 film Ossessione may be one of the lasting classics...
Read More