Writing takes time. Sorting out your thoughts and feelings and reactions takes time. But often we see only films just before they’re released and have a few hours to give you all a view before they hit the screens. And sometimes that doesn’t do the film justice, no matter if the film is bad or good. That’s very much the case with James Gray’s Ad Astra. This is a film that needs to be sat with, needs time to marinate in the brain. Its scope is both vast and personal, deep in space and ideas. So this is really just a first impressions review, a quick download of what’s swirling around in my brain. But these might change. Films morph in the mind a few days after seeing them, new things emerge, different connections are made.

Where better than in the infinite stretches of space to confront who we are. When all that you know becomes just a small point in the sky, what do you become. Every voyage becomes one of self discovery. I think that’s why, at heart, every space film is a psychological thriller. Being out there forces some sort of reevaluation of the self, of humanity’s place in the universe. Ad Astra is no different, an homage-filled meditative thriller. Brad Pitt is Roy McBride, a preternaturally calm member of America’s Space Command in the near future. He’s working on the International space antenna when Earth is struck by destructive electrical pulses emanating from deep space. SpaceCom believe there is some connection with his father (Tommy Lee Jones), who went missing, presumed dead, decades before on a search for extraterrestrial life at the farthest edges of the solar system. They dispatch Roy to Mars to try and send a message to the lost project in the hopes of stopping further catastrophe. 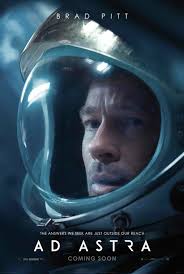 Loneliness, father-son relationships, violence, death, how we tether ourselves to and can’t let go of things we love but that are destructive, journeys into darkness and the unknown, and our ultimate place in the universe, all filter through mesmerising, symbolic visuals that intertwine memory, vision, and message, all on wonderfully constructed, atmospheric and evocative sets of claustrophobic ships, subterranean lakes, cratered dark sides of the moon, and decaying planetary bases.

The film is Gray’s most epic in scale, but it’s told from a personal level. The camera is often tightly framed on McBride’s head, but we’re also inside it, both from his visual point of view but also in his mind. Alongside routine, revealing vocal psychological evaluations, which determine his suitability to continue the mission, there’s also recurring voiceover where McBride questions and confesses all. It leaves absolutely no doubt about what exactly this is all meant to be about and is the film’s biggest weakness. It’s all unnecessary. These are things we can uncover from the visuals, from story, from Pitt’s restrained, excellent performance. We can infer the tensions between McBride and his father from the twitch of his mouth when he’s first mentioned; can see in his eyes the shadow he still lives in when his fellow astronauts deify the father; can see the distance between McBride and his wife in the shallow depth of field of their shared frame. We don’t need that all laid out in a Malick-lite voiceover or in transparent dialogue. It lends the film a self-seriousness that almost upends it and makes it parodic; and suggests that it’s not confident enough in its performance and visuals to do its storytelling.

That’s not the only Malick – who Pitt worked with on The Tree of Life – influence here. It’s also felt in the number of religious references and the clear crisis of faith (in God, in his mission, in his father) affecting McBride, and the hypnotic sequences that twist our vision as he reaches deep space. Apart from the clear sci-fi influences, from 2001 to John Murphy’s soundtrack for Sunshine and cinematographer Hoyte Van Hoytema’s work on Interstellar, the other strongest inspiration is clearly Apocalypse Now, and maybe that’s why Gray also felt the need for the voiceover. Like in Apocalypse, we find ourselves joining a mission into the heart of the unknown, hitching a ride with unsuspecting crew and the true purpose hidden; a journey to confront the character’s self and the person that’s a reflection of them, who they’ve both become, why they’ve been chosen, and the secrets behind it all. It ends on a different note here though, one made more hopeful. This is all we’ve got. Make the most of it.

Ad Astra is in cinemas from 19th September through 20th Century Fox.

Written By
David Nagle
More from David Nagle
Kingsman: The Golden Circle is the cinematic manifestation of the guy who...
Read More