For the creatively named It Chapter Two, sequel to 2017’s It, director Andy Muschietti, screenwriter Gary Dauberman, and cinematographer Checco Varese all return. This contributes to its largely seamless transition in characterisation, mood and style. But while the film’s consistent components are generally well-executed and cannot be heavily faulted – the acting is uniformly strong, the cinematography is impeccably crafted – in the end, the whole ultimately amounts to less than the sum of its parts. These consistencies appear to have been prioritised over any sense of creative dynamism, and ultimately the film relies too heavily on retreading familiar territory than on significantly extending the solid foundations of its predecessor.

The film opens in 2016, 27 years after the events of the first film. Pennywise (Bill Skarsgård) – the deranged, dancing clown – has returned to torment the youth of Derry, Maine. And so, at the behest of Mike (Isaiah Mustafa) – the only one not to have left the town – the Losers’ Club are summoned back: de facto leader Bill (James McAvoy), wisecracking Richie (Bill Hader), anxious Eddie (James Ransone), sensitive Ben (Jay Ryan), practical Stanley (Andy Bean), and resilient Beverly (Jessica Chastain). All of them except Mike have seemingly forgotten the harrowing events of their childhoods, although visceral psychological scars remain. In order to defeat Pennywise once and for all, each must first confront these suppressed memories and together find the strength to overcome their fears. 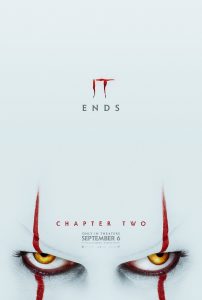 What the film does well is achieve stylistic and performative continuity. Skarsgård’s Pennywise is, again, reliably creepy. The cinematography remains for the most part cleverly constructed, with the same eerily dulled colour scheme and crisply edited scenes. And the child actors and their adult counterparts are in sync with each other; there are no glaring inconsistencies.

However, this same consistency can also be viewed as a lost opportunity for aesthetic or narrative development to mark the film as distinct. The cinematography is reminiscent of the first film, to the point where the scares are often predictable. Skarsgård, while again immersive, is not given many new angles to work with in making Pennywise menacing in novel ways. And as adults, the Losers’ Club seem, deterministically, like mere continuations of their childhood selves. Consequently, instead of developing more dynamic, richer portrayals, the film is largely devoted to examining, or perhaps more accurately revealing, the ways in which they have remained the same. The sole exception is Richie. Given the film’s interest in excavating personal regrets and insecurities, what is ultimately emphasized is earnestness at the expense of levity (although, again, Richie is perhaps an exception).

There is a running joke throughout the film that Bill – now a mystery novelist – writes terrible endings. And while the film’s ending is by no means terrible, it does not achieve what it strives for. In echoing the ending of the classic, and similarly themed, 80s film Stand By Me, it aims to evoke a bittersweet sense of nostalgia. Instead, this emotional crest does not feel earned but forced and, because of the film’s lengthy running time, ultimately diluted. It is a tepid, derivative end to a second chapter that did not feel that much different from the first.

It Chapter Two is in cinemas from 5th September through Roadshow Films.

Written By
Dan Santos
More from Dan Santos
The search for elusive cures to genetic disorders and illnesses is one...
Read More