It feels like 12-year-old me – which was not that long ago – grew up in a different world to today’s kids. We didn’t know things they do, didn’t have the entirety of human knowledge at our finger tips, couldn’t communicate with each other like they can. We had to get through the landline parent barrier to talk to each other, and the internet was barely a thing. But even though it’s about today’s kids, watching Good Boys still took me back. Back to a time when I was on the cusp of teenagedom, my hair gelled down in curtains, about to start a new school, and hung up on being cool and attracting the right kind of attention. Good Boys speaks to those universal times for a young kid, and it has a sweet, sometimes insightful side; a side about the pressures of growing up and fitting in, first loves, and friendships that feel like they’ll last forever. But it’s distracted by trying too hard to still be the occasionally crude, gross out-lite comedy you’d expect from the producers of Superbad and the writer of lesser films like Bad Teacher and Year One (Gene Stupnitsky).

There’s little new in the setup of Good Boys. It closely follows the formula of coming-of-age comedies like Superbad, obviously, in shadowing its leads over the course of a couple of days as they try to pull off some plan, all while things escalate and spiral out of control. It’s usually all about a party and that’s still the case here, but the twist is that the heroes are a lot younger than we’re used to seeing in these kinds of movies. That means it’s a tween ‘kissing party’ thrown by the coolest kid in the grade. Max (Jacob Tremblay, Room) gets an invite, and manages to get a couple more for the less popular members of his squad, Thor (Brady Noon) and Lucas (a standout Keith L. Williams). But Max’s real problem is that his crush is going to be there, and none of them know how to kiss. A misguided attempt to learn some skills snowballs, ending up involving drones, drugs, frats, skipping school, and their teenage girl neighbours as the villains (the excellent Molly Gordon and Midori Francis). 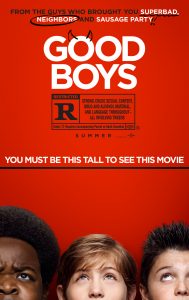 The film is over reliant on one type of joke, but it successfully mines the furrows of innocence, naivety, and the misunderstood knowledge of the adult world that comes at that age. The so-called ‘beanbag boys’ try hard to be bad, but they still have bed times, argue over how tampons are used, recite the messages of school assemblies, have to google how to kiss, and, when they find a ‘CPR doll’ in one of the kid’s parent’s bedrooms and decide to practice on in, wonder why the mouth is so sticky. As sitcom veterans, Stupnitsky and co-writer Lee Eisenberg know how to pack in the jokes and deliver most punchlines, and there are lots of laughs from seeing those cherubic little faces and the incongruity of the words that come out of their mouths. That well runs a bit dry in the final third, but the characters’ chemistry and supporting turns of the likes of Rhetta, Lil Rel Howery, and Stephen Merchant keep up the energy for a satisfying ending.

In aiming to remake it with tweens, the creators of Good Boys have almost succeeded in reaching the levels of raunch and feeling of Superbad. Even though the jokes get a bit one note, it’s the emotional heart that makes this one of this year’s better comedies.

Good Boys is in cinemas from 19th September through Universal Pictures.

Written By
David Nagle
More from David Nagle
Sometimes in business it’s not about the numbers or the metrics, about...
Read More