Bone Tomahawk and Brawl in Cell Block 99 made S. Craig Zahler the cool new kid on the block of the genre scene. Returning for a hat trick of deliberately paced ultra violence and prosaic dialogue, Dragged Across Concrete proves that Zahler shows no sign of slowing down. He’s crafted his perfect little niche in the filmic world, where talents for morally questionable content mixed with some truly shocking violence make for a fascinating mix of the arthouse and grindhouse.

Brett (Mel Gibson) and Anthony (Vince Vaughn) are the thin-blue-line of their urban beat, detectives who aren’t above a few cases of bribery and assault to get what they want. The city of Bulwark swelters under a crime wave, Brett’s daughter gets assaulted coming home from school for the fifth time in two years, and it becomes clear to many that working a full time job doesn’t cover expenses half as well as crime does.

After getting caught on a phone camera assaulting a Hispanic suspect, the two are suspended without pay; after all “Being branded a racist in today’s environment is like being labeled a communist in the 1950s”. With plenty of free time they start tracking a group of bank robbers,  including ex-con Henry (Tory Kittles). They face a choice: stop them or follow them just long enough to get the money at the end.

Dark detective pieces seem a good fit in the current context. Moral ambiguity and social rot seem like the rule rather than the exception, where politics and reality often veer in opposite directions. Gibson’s character laments that he feels like he’s been left behind; “I don’t politic and I don’t change with the times”. It’s a perfect piece of casting given what we know about Gibson’s past. Few can do a dead-eyed stare half as well. It still isn’t clear whether Vaughn has the serious acting chops to keep up his current career turn around, but if there’s one thing that Zahler brings out in him it’s the sheer physicality that the six foot, five inch Vaughn can muster given the chance. 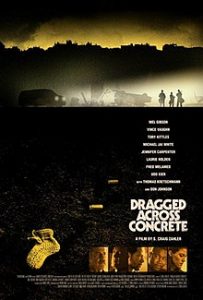 The world of this film has all the bravado and prose of a great neo-noir. It’s a hard boiled tale of cynical men in an increasingly cynical world. While it’s good to see a film that isn’t afraid of exploring the darker tinges of our times, given to the wrong audience this might ring like endorsement. There’s a tendency in Zahler’s work to veer into subjects that most other directors don’t go near, then do just enough work to get away with it. This is after all a film that contains a character starting a monologue with “I’m not racist, but…”

Deliberate pacing isn’t something that Zahler and his editor Greg D’Auria shy away from. There’s no rush to get to all the big memorable moments. The journey is the destination on his screen, equally concerned with getting all the pieces into place before the action starts. Just like in Brawl in Cell Block 99 how Vaughn doesn’t go prison until 50 minutes into the film, it isn’t until the three quarter mark that the bank robbery actually happens.

Scene after scene is spent on the setup – tracking the gang, getting their car organised, getting snacks as they park outside. While the pacing does grate at times, the filmmaking – which opts for long, deliberate takes usually done in mid-shot where the camera doesn’t move unless it needs to – and excellent soundtrack make it an almost zen experience. It also means that when Zahler’s taste for ultra-violence – which goes into an almost pornographic detail and shows itself in the most matter-of-fact, unflashy way – hits the screen it hits like a battering ram.

Dragged Across Concrete is the kind of hard boiled pulp fiction that combines interesting writing with unique filmmaking. While it’s far too long – there is potentially a brilliant two hour film inside the two hour and forty minute one we have – for those that like the acquired taste of S. Craig Zahler it proves that his first two were no fluke. He is one of the most original directors working at the moment and it will be fascinating to see where he goes next.

Dragged Across Concrete is in cinemas from 29th August through Icon Film Distribution.

Written By
Simon Storey
More from Simon Storey
In the shamefully recent past of the mid-twentieth century, Victor Hugo Green,...
Read More