Directed by Daniel Gordon and written by Stan Grant, The Australian Dream is a documentary charting the career-ending experiences of racism subjected on Australian Rules footballer Adam Goodes. The documentary pairs Goodes’ story with Grant’s own reflections and experiences of what it is to be an Indigenous Australian. The film is a portrait of a circumstantial hero, a man who becomes the ambassador the cause is crying out for.

The Australian Dream recalls the months in 2013 when Goodes became the center of the national racism debate. Making headlines across Australia at the time, Sydney Swans player Adam Goodes called out a fan who taunted him during a game. The 13-year-old Collingwood supporter called him an ape, and Goodes flagged security to remove her from the ground. The furor which followed in the weeks after was unprecedented in Australia, with Goodes booed and jeered both on and off the field, and media commentators divided. The toll taken on Goodes was evident, and he ultimately retired from the game within a few more seasons.

Pairing Goodes’ story with his own experiences and the history of Indigenous Australia, journalist Stan Grant presents a very bleak truth about racism and our national attitudes to the subject. Grant and director Gordon interview a list of prominent names – some esteemed and others not so – to share their experiences. Gilbert McAdam, Nicky Winmar, Nova Peris and members of Goodes’ family talk poignantly of Goodes, of sport and of being Aboriginal. Other figures to contribute include journalists Eddie Maguire and Andrew Bolt, who were conspicuous voices at the time. 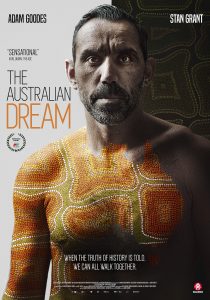 In a subject fraught with tension, Grant and Gordon make a valiant attempt at balance; giving Bolt and Maguire a voice is noble, but perhaps this is unnecessary.  Do they really need another platform, given their notoriety and profile?  In one sense it doesn’t matter; the pair of them essentially perpetuate their gaffs; only Maguire hints at any semblance of contrition or self reflection, Bolt takes his previous stance to the next level.  In another sense, the question is left hanging as to what was gained from including them.  But then that’s the point; inclusion.  It matters. Deeply.

Stylistically, although the film is beautiful, it sits more as a well argued essay than as an example of exceptional filmmaking.  It hits the mark, but it does lack something.  Thinking of the documentaries such as Amy and Senna by Asif Kapadia, the filmmaker in those instances lets history do the talking, and stitches together a visual tapestry of existing audio and footage.  In this case, the filmmaker Gordon and writer Grant do lay the tone on a little thick – with good reason, and to good effect, but it lacks subtlety. That said, this film is crying out to be unleashed in the classroom – it is educational, and utterly important on this level.

Ultimately this film is heartbreaking.  It is a true reflection of who Australians are as a people, how far we’ve come, and still need to go.  Recognising that the success of our indigenous heroes is so much harder won than that of Anglo Australians is a tough pill to swallow. But Adam Goodes is the right teacher for this lesson. The Australian Dream makes clear the eminent qualifications Goodes has as a leader, a teacher and as an ambassador for us all.

The Australian Dream is in cinemas from 22nd August through Madman Films.