There was a shower thought from a couple of years ago that pointed out that if someone had the idea of establishing a library in the modern world, there’s no way it would go ahead. Governments would start yelling that it was communism and vested interests would immediately shut it down – Big Novel flexing their lobbying power, if such a things exists – so it’s very fortunate that at some point in the past the vehicle for knowledge was nationalised.

The Cincinnati Public Library is the setting for Emilio Estevez’s latest directorial offering and, much like The Way back in 2010, the older brother of the Sheen family has his heart in the right place but can’t quite stick the landing. A great cast combined with some perfectly aimed shots at the staggeringly unequal zeitgeist save this from being a complete waste of time but the emotional heights it aims for are rarely reached.

As a particularly nasty cold snap hits the Midwest, the Cincinnati public library has become a refuge for the city’s sizeable homeless population. This small building becomes a microcosm of American demise, as the richest nation in the history of the world somehow allows its own citizens to die of exposure while entire housing lots are unoccupied. For librarian Stuart (Estevez) it presents its own moral conundrum, being a former drug addict himself who spent time on the streets. As the city’s many homeless shelters fill to capacity and the prospect of spending the night on the street carrying a likely death sentence*, a union of homeless people led by Jackson (Michael K. Williams) decide to occupy the library with its lighting and heat for the night. Police are called and the situation spirals out of control, as it’s not clear if this is a peaceful protest or a hostage situation. 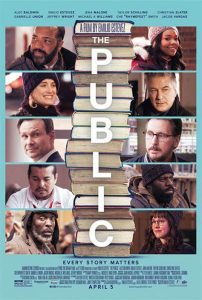 The term sometimes used is a “High Fibre Film”: good for you but not altogether tasty. The Public is a love letter to public libraries – as one character describes them: the last bastion of true American democracy – but Estevez’s script is buried under a ridiculous amount of sub-plots and some truly clumsy execution.

With such an excellent cast it’s a real shame. Emilio Estevez and his family are one of the most talented acting dynasties in Hollywood, which could explain the presence of Alec Baldwin, Christian Slater, Jeffrey Wright and Taylor Schilling in relatively small roles, because it’s obvious the script didn’t attract them. Everyone has something small to do – in plots that include political satire, police procedural, a love story and a few jabs at media narcissists – but the ending is so misconceived it’s not worth the set up. What’s supposed to be light hearted and touching is genuinely cringeworthy.

Still, with films like this it’s always worth considering what they’re saying rather than how well they’re saying it. Estevez clearly has a lot of empathy for these characters and their various plights. As the the ever expanding divide between rich and poor reaches staggering new heights and the opioid epidemic tears lives apart across the continent, the stories of people like this are always worth telling. It’s unfortunate that this doesn’t hit nearly as hard as it should. Poor musical choices are a factor, as the music by Tyler Bates and Joanne Higgenbottom feels like it belongs in a different film and ruin the tone of some scenes that seem like they’re trying to be emotional.

With a cast of greats and some big things it wants to say, The Public is a well intentioned but awkward misfire. It’s a decent ethics lesson but not a compelling film, there’s very little reason to seek this out.

The Public is in selected Australian cinemas from Thursday 1 August through Rialto Distribution.

*For a film shot in 2017 it predicts to a fairly incredible degree what happened in early 2019, as a freak cold wave killed 22 people in the American midwest. Temperatures dropped to -40’C some nights.