If Dwayne Johnson’s biceps didn’t already look a little absurd, then they’re not getting any smaller on a 23-metre tall IMAX screen. Frankly it can be a bit much at times. Maybe that’s just my insecurities flaring up, but you might wonder if Jason Statham feels the same when you consider the large wardrobe of turtlenecks he samples in the early scenes of Hobbs and Shaw to cover up. This spin-off from the bloated Fast and Furious franchise’s most recent film, The Fate of the Furious (number eight! Belch), really requires a star to be able to hold their own in combat, because if you’re not beating someone up, then you’re getting beaten. It’s a cruel world.

Certainly much of Hobbs and Shaw is a measuring contest, presumably with the man who writes WWE smack talk on call. But there is a plot involved, and it is predictable to the extent that Luke Hobbs (Johnson) and Deckard Shaw (Statham) will be confronting armies of goons at small odds before long. They say they’d rather not work together, that they hate each other and could do the job themselves — Hobbs being some kind of world-saving government operative, Shaw a loose unit who used to be an elite military operative. Clearly these two haven’t heard the saying, ‘Hurting is flirting’.

For all their chat, they inevitably find themselves working side by side when a cybernetically-enhanced terrorist Brixton (Idris Elba), who describes himself as Black Superman, threatens to unleash a viral epidemic across the planet. Complicating things is Shaw’s sister Hattie (Vanessa Kirby), an MI6 agent who is forced on the run after being ambushed by Brixton. She was meant to be protecting the virus. Now she has ingested it and needs the help of Dex and Luke to stop the world from succumbing to the virus’ ‘insides-melting’ horror. 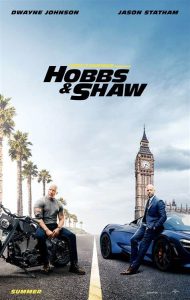 Director David Leitch has made a name for himself in recent years crafting films around trigger-happy rogues with little care for collateral damage, John Wick and Atomic Blonde being just some of his credits on top of Fast and Furious duties. For consistency’s sake, he has also brought along writer Chris Morgan to continue the eponymous rev-head rivalry/duo he gave oxygen to in Fate of the Furious. Heavy builds belie slim backstories, as Hobbs and Shaw coasts on its star power, and while Hobbs and Shaw skips with a lighter mood than the vengeful antics of a grieving Keanu Reeves, Leitch and Morgan’s blockbuster credentials are on show in delivery of quality action. To be fair, it is a reliable strategy. Johnson will bring the fans and Statham will stalk after him, muttering his familiar tune of barely contained cockney rage.

Not that this is a bad thing if the primary aim is outrageous stunts, gravity-defying cliff chases and kicked arses. Fitting advice is to check your brain at the door, but of course you knew that. You can admire the machinery and outrageous stunts, or you can admire Hattie’s martial arts skills. Any reprieve from skulls being cracked is welcome, even if it is just a slightly different mode of dismissal. By all means laugh at the seamless transition from Ukraine to Samoa in what is one of the film’s most endearing moments. Or if nothing else, wonder at how Hobbs can put on a singlet, cargo pants and boots mid-battle in a matter of seconds. Is there nothing the man can’t do?

Hobbs and Shaw is frantic, loud and long, but it is lifted by strong chemistry across the board. One might accuse it of wasting a talent like Idris Elba, who is clearly capable of more, and exhausting patience with balls jokes as Johnson and Statham exchange cheese. But it is precisely the movie you’d expect from some mates getting together over beers with a massive budget to enact their wildest fantasies. All you can ask for is solid commitment from everyone to its ridiculous premise, and Hobbs and Shaw hits the board often enough and with enough confidence to keep fans happy.

Fast and Furious: Hobbs and Shaw is in Australian cinemas through Universal Pictures.

Written By
Angus Tonkin
More from Angus Tonkin
It is strange that a director so lofty as Luc Besson should...
Read More