Most would think Juliette Binoche has nothing to worry about, but it seems Claire, her onscreen persona in Safy Nebbou’s Who You Think I Am (adapted from the novel by Camille Laurens), doesn’t feel the same way about post-50 life. Since breaking up with her husband of 20-odd years she has struggled to build connections and, in search of companionship, has thrown herself headlong into social media with all the squinting bemusement and tentative poking at keyboards you’d expect of someone coming to Facebook so late that even Facebook is looking a bit peaky.

The soft popping of the ‘typing’ ellipsis, like fingers drumming on a table-top, becomes a blessing and a curse for Claire, bringing about alternating swells of giddiness and impatience. For on the other end of that impending message is the youthful photographer Alex (François Civil). He’s really into her. Tick. She’s into him. Tick. But of course it’s not really her, Claire the professor and mum of two, that Alex is interested in; it is Clara, her online avatar, who happens to be a reclusive young fashion events manager of 24. Perhaps Claire doesn’t know the term ‘catfish’, but the deeper she goes, it’s increasingly uncertain to her whether the term would still apply. In her head Claire and Clara aren’t so different. But then where does she presume that this will end?

Conceits such as these must inevitably result in one thing: angst. Barrow-loads. An amount proportionate to the amount of damage online deception can do to another’s mental health but perhaps disproportionate to the amount of effort needed to indulge the practice. There is Alex’s angst at whether Clara will ever let him meet her. There is Claire’s angst over her age, over the excuses she must whip out at short notice to put him off but keep him close, over the thought of losing this semblance of intimacy and self-worth. Then there is Claire’s therapist’s (Nicole Garcia) angst over how much Claire’s concerns apply to herself, being of similar age, but more pressingly over whether Claire needs helping, rescuing or detaining. 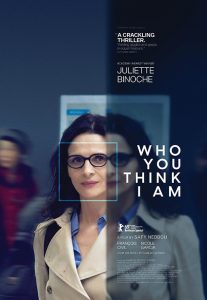 Past the angst is either a neatly engineered exit plan with a path to redemption, or else the promise of complete self-destruction. To a large extent Who You Think I Am, penned for the screen by Nebbou and Julie Peyr, creates tension by walking this tightrope. Is Claire in control of or slave to her impulses, and what’s more, is she capable of cutting them off? As a lecturer on comparative literature, she is certainly given the forum to reflect on the nature of love, obsession and identity in fiction, even to lecture other young students on themes relevant to her own problem of living a fictitious existence. Such a convenient occupation to this plot feels contrived, but it also serves its purpose in encapsulating just how alienated from her reality she has become through indulging the interests and mannerisms of her Gen-Y alter-ego.

In dissecting these themes Nebbou’s film is focused and enhanced through Claire’s therapy sessions with Dr Catherine. Their ongoing interactions are candid and thought-provoking, probing Claire’s motives and prompting her to self-reflect about life as a 50-plus divorced woman. This narrative device also gives these two women opportunity to explore the conditions that might lead to Claire’s situation and behaviour, driving the story at least away from quick diagnoses of insanity, if not quite to victimhood.

That the film is sympathetic enough to give Claire the space to work through her behaviour and scrutinise personal and perceived identities, helps give Who You Think I Am some heft. Though it is difficult to say whether its screenplay provides as many answers as it does questions about its anti-hero’s behaviour. It neither excuses nor condemns it, merely reveals it bit by bit as any good thriller might. In escalating (or descending, depending on which way you picture Claire’s staircase spiralling) to a crazed conclusion, it seems that Nebbou is torn between two directions: exploiting a catfish scenario’s obvious capacity for thrills; and scrutinising the effects of social media and virtual identities on mental health. He doesn’t quite do either, but the manner in which Nebbou weaves this conflagration of lies and half-truths into a thoughtful, well-paced and stylish film is impressive. Binoche certainly helps. She is just who we think she is: a gifted performer.

Who You Think I Am is in cinemas from 1st August through Palace Films.

Written By
Angus Tonkin
More from Angus Tonkin
With Winnie the Pooh being such a compassionate portrayal of childhood imagination,...
Read More