Fans have shown a particular taste for revisionism this year, with the ending to Game of Thrones riling even the most patient of viewers and sparking petitions for reshoots, but if Shakespeare is any precedent, that may have to wait another few centuries. In the meantime the reinvention of Shakespeare continues in abundance, the latest being Claire McCarthy’s Ophelia, an imaginative if reductive adaptation of Lisa Klein’s young adult novel of the same name. McCarthy and screenwriter Semi Chellas rescope the events of Shakespeare’s Hamlet from the perspective of the boy prince’s love interest, who would ultimately drown herself in a lake. McCarthy and Klein’s vision starts with a vision of the end, Ophelia (Daisy Ridley) pale and face-up in a pond, bouquet in hand, but of course, as our heroine narrates, this isn’t the story we know.

Daughter to Polonius, trusted adviser to the king, Ophelia wasn’t born into royalty. In her early days she was a lively and bright girl more likely to be found gawping from the wings of the royal court as a grubby-faced ginger and swimming in the surrounding lakes than dreaming of royal romances. When she catches the eye of Queen Gertrude (Naomi Watts), however, she becomes both a project and a trusted right-hand woman. And while her lowly birth, her boldness, her shock of hair and her ability to read may make her an oddity worthy of mockery to the other ladies-in-waiting, they are precisely the attributes that ignite the hormones of Hamlet (George MacKay), Gertrude’s son and apparent heir to the throne.

Shakespearean romances are rarely painless and the plot of Hamlet is no exception. No sooner has love blossomed than strife rises to meet it. The king has died and his brother Claudius (Clive Owen), Hamlet’s uncle, has moved in on the crown by marrying Gertrude. Planned? They certainly have their doubters. Hamlet, having been away at school, is one and returns in a fit of rage. He is not a lovestruck teenager anymore with eyes only for Ophelia; his taste for vengeance has hardened his outlook and scattered his mind. Blood will be spilt. Caught in the middle between the dubious motives of Gertrude and Claudius and Hamlet’s brash ego is Ophelia. Talk about a rock and a hard place. You’re too good for this rabble. 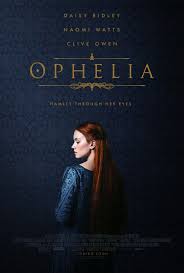 Ophelia’s treatment in Hamlet is nothing less than baffling in its brevity, so her story is ripe for exploration. McCarthy recasts her role here from one defined by suicidal madness to one of independence and intelligence in a heartening, if distinctly 21st-century, take on Ophelia’s agency throughout the whole ordeal. And what an ordeal it must be to be maid to a vain Queen who sources potions from shady doppelgangers living in the woods (Naomi Watts working overtime in an intriguing twist on the narrative) and then to be courted by a boy who could barely sneeze without wimpering.

Shakespeare’s Hamlet, while mad, seems at least to be a cunning and charismatic operator capable of terrible but great deeds. McCarthy has essentially flipped the table, which is her right, but in elevating our opinion of Ophelia, McCarthy has lowered too much our estimation of Hamlet, which in this case tends to undercut the melodrama driven by their young love. MacKay’s Hamlet is far too naïve and boyish to inspire passionate chemistry with the likes of Ophelia, who in our heads has already battled a sith lord. What have you done, mate? Yeah, didn’t think so.

Perhaps it doesn’t help that much of the language that makes Hamlet so memorable is truncated, simplified or omitted altogether so as to quicken the pace and make sense of it for a modern audience. ‘To be or not to be’ and ‘Alas, poor Yorick’ are victims to the cutting room floor, and so there is no risk of people dampening the mood through excessive monologuing. ‘Get thee to a nunnery’ becomes ‘Get to the nunnery!’ and loses all mystery in coming across as if Hamlet were parodying ‘Get to the chopper!’. All of this seems indicative of how much of Shakespeare’s nuance has been ironed out, which tends to contribute to an ever-building impression of Ophelia as fan fiction more than logical expansion. McCarthy and her team have taken admirable risks in filling the gaps of Ophelia’s plight and crafted a thoughtful retelling. It is also brightly shot, Ridley is appealing, and Owen relishes his chance at villainy. But Ophelia feels too grounded in the present to be a serious exploration of the source material.

Ophelia is in cinemas from 1st August through Madman Films.