There’s no shortage of films and documentaries about the moon landings but with the 50th anniversary of those astonishing days fast approaching, Todd Douglass Miller’s Apollo 11 will go down as one of the finest ever crafted. There’s no interviews, talking heads or voice over. Apart from the occasional animated segment tracking the crew’s journey, this goes down the Senna route of being entirely archival footage.

We’ve all seen the shots taken by the lunar module, possible the most famous footage anyone has ever taken, but Miller cleverly starts with the Saturn V rocket on the tarmac at the Kennedy Space Center and tracks the long process that it took to get those men there. It was an eight day journey for Neil Armstrong, Buzz Aldrin and Michael Collins, and with a treasure trove of previously unseen 70mm footage recently unearthed in the US National Archives, we see it like never before.

NASA gave over 11,000 hours of audio recordings to this project, which has been painstakingly synced with available footage. We see and hear the key proceedings at roughly the same rate as those who were there. Those eight days are brought to the screen with awe-inspiring clarity, by the time we hear Armstrong declare “That’s one small step for [a] man, one giant leap for mankind” we feel every word. 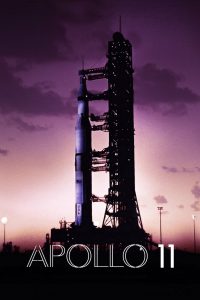 For those of us born decades removed from that incredible day, Apollo 11 delivers one of the best inklings into what it must have been like to live through it. With the world watching their every move, NASA didn’t know if they were sending three men to their deaths, as one tiny miscalculation would have spelled disaster. The film also gives often overlooked Michael Collins his time in the limelight. As Armstrong and Aldrin were down on the surface it was his job to stay aboard the Columbia in lunar orbit. For 48 minutes of each cycle he was cut off from radio contact from both earth and the landing craft – a state of solitude that no human being has experienced before or since.

The footage looks  incredible. All the various period films – 16mm, 35mm and 70mm – come out in a crisp finish, showing off the stunning clarity that modern touch-ups can accomplish. Alongside Peter Jackson’s extraordinary They Shall Not Grow Old it seems we’re witnessing the birth of a new type of documentary where archival footage can show us the stories it holds – history speaking for itself. With cinema being the defining art and technology of the 20th century, the possibilities of what the coming years could show us are exciting.

Alongside the awe and wonder, there’s a creeping sense of melancholy for the modern viewer. This was the last time that the human race was united in one accomplishment. Yes, it’s easy to think of the space race as an international pissing contest between the Soviet Union and the USA (and everyone forgets the Soviets won every other milestone). However, what it represents more than anything else is what humanity can accomplish when it strives towards massive goals. It took years and cost billions of dollars, but by the end Apollo 11 accomplished possibly the single greatest feat of human endeavour.: living organisms leaving their home planet to explore others. It is – as far as we know – unprecedented in the history of the universe.

In the modern world where people walk around with technology that NASA couldn’t have dreamed of in their front pockets, it’s an arresting idea that only the tiniest fraction of world history will get to be seen and shared as a collective. Apollo 11 is an extraordinary chance to see moon landings in a documentary that is both intimate and awe-inspiring. See it on the biggest screen you can find.

Apollo 11 is in cinemas from 18th July through Madman Films.

Written By
Simon Storey
More from Simon Storey
King Lear, surely one of the most challenging roles that the Bard...
Read More