The title of Ash Mayfair’s debut film, The Third Wife , evokes the dehumanising, commodified nature of life for its eponymous character. Her name is May (Nguyen Phuong Tra My), a 14-year-old who is plucked from a Vietnamese village to become the latest wife of a rich landowner (Le Vu Long).

This story of female oppression is remarkably lean in detail – in other words, nothing much happens. Yet this isn’t to the film’s detriment. Its source of energy is Mayfair’s images: they do well to create impressions, moods of torment, subversion and melancholy, and a distinctive aesthetic rare for a first-time feature director (although it does seem Mayfair’s experience in short film has significantly informed her work here). The Third Wife feels more like portraiture than cinema. 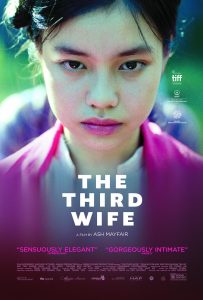 The images are upright, stiff, rigid – mirroring the circumscribed way in which life is governed in 19th Century Vietnam. Stillness often pervades as the three wives remain stranded on their husband’s expansive yet confined property. The Third Wife almost entirely transpires on this property, which, coupled with Mayfair’s cinematographic excellence, produces a sense of the suffocation experienced by May and the other wives. However, at other times, the camera takes in the green, fog-covered mountains that surround May’s world, gesturing at greater, more liberating possibilities for the women.

From start to end the film is beautiful. But it’s a beauty infiltrated by a menacing, haunting quality not too different from Robert Eggers’ The Witch or Park Chan-wook’s The Handmaiden. It’s Mayfair’s directorial approach that renders it all a success. There’s nothing hurried or didactic about The Third Wife; instead, Mayfair presents us with subtly-drawn images that melt away with time. All of which creates a unity of style and theme.

In the best sense of the term, The Third Wife is a film of surfaces. It isn’t psychologically, philosophically or socially dense, yet none of this does a disservice to Mayfair’s aims and ideas. You probably won’t remember the words uttered by the film’s characters, but its images – and their associated evocations – will linger.

The Third Wife is in from 4th July cinemas through Potential Films.

Written By
Nick Bugeja
More from Nick Bugeja
Patriots Day is a film that did not need to be made....
Read More