Werner Herzog’s own documentaries are interested in trying to visualise the invisible, in seeing inside the mind, the soul, and exploring the depths and reaches of the human spirit. So, one might hope that a documentary from his friend and long-time colleague Herbert Goller – which follows the production of the 2009 film My Son, My Son, What Have Ye Done – would look to really get inside his head, examine his process, and find out how and why this cinematic poet makes films like he does. But this is a more detached, external view of Herzog. There are no to-camera interviews here. Goller, equipped with his own camera, is off to the side, observing, explaining what’s happening through highfalutin narration on topics like storytelling and human nature, which mirrors Herzog’s own preference for ornate voiceover. 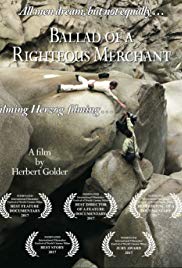 Still, there’s no doubting the insight that Goller has through over 25 years of collaboration on numerous projects with the famed German director. The film is definitely something of a special interest (to the point where it feels more like something that should be a DVD extra) and assumes a level of Herzog knowledge in its accessibility. For students of film, it’s fascinating to see Herzog interact with actors of the calibre of Willem Dafoe, Michael Shannon and Chloe Sevigny, to see how he literally conducts a cast, manoeuvres a camera, orchestrates his actors, has a film hold its breath, or how he adapts a script for the physical place he finds himself in.

While the sub-title might be “Notes on Werner Herzog directing…”, Goller also tries to make his short documentary as much a look at the story behind the film and a meditation on humanity, as a study of how the director works. Herzog’s films have long been interested in the mad, the genius, the misunderstood, those on society’s fringes, and so Goller peppers his work with quotes from the man who served as inspiration for the plot, the “poetry of his madness” from a man with a “case of terminal Greek tragedy”. But really this is of less interest than seeing a fascinatingly flawed film in the midst of its production. If you’re patient with the pace, the philosophical musings, and the sometimes difficult to hear audio quality from the candid handheld shots, there’s real filmmaking insight to be found.

Ballad of a Righteous Merchant screens as part of the Melbourne Documentary Film Festival from 19th to 30th July.

Written By
David Nagle
More from David Nagle
What do you do when you've lost your only advantage? How do...
Read More