It’s almost impossible to reflect upon INXS these days without referencing the untimely suicide of their lead singer Michael Hutchence in 1997. As such, it’s almost impossible to forget Hutchence’s fate while watching Mystify: Michael Hutchence, the feature length documentary dedicated to the frontman’s life. Before the film has started, we all know how it’s going to end. And while director Richard Lowenstein‘s documentary contains some fascinating journalistic insights about Hutchence, Mystify largely fails to be more than just a cookie-cutter biographical film experience.

The inevitability of Hutchence’s death, combined with an abstract eeriness that pervades the film from start to finish, means Mystify is never quite a comfortable film. Far from the nostalgic cheeriness evident in other music-themed films, Mystify reserves more screen time to contemplating the trials of its subject than celebrating his music successes. 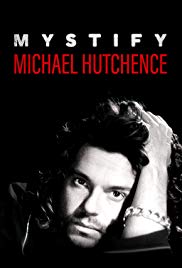 That’s not to say INXS and Hutchence’s rise to fame isn’t documented; much of the first half of the film charts this rise and allows us to enjoy INXS’s best hits. However, Lowenstein isn’t particularly creative in how this is communicated, denying the audience of many narrative flourishes or particularly rich stories. Rather, Hutchence’s life is recounted in chronological order, largely through home footage, tour archives, and interview voiceovers. Occasionally Lowenstein resorts to time travel, transporting the audience back to Hutchence’s childhood, but rarely does the film let itself unfold through uninterrupted and uncut source footage.

This denial means the audience is seldom allowed to live in the moment and make their own judgments of Hutchence and those close to him. Instead, disembodied voiceovers come and go like ghosts, taking turns to trade memories of Hutchence. They are the sole arbiters of what to think and feel about Hutchence.

The lack of immediacy contributes to the film’s ominous vibe and the impending sense of doom that grows in the film’s final thirty minutes. Before tragedy strikes, though, we are treated to a few nice moments. The episodes of Hutchence’s life when he is besotted by his love for Michele Bennett, and then later Kylie Minogue, are a joy to watch. Similarly, the film shines when we get to revel in Hutchence’s talents and celebrate his brilliant voice and contagious personality.

It’s a shame the film didn’t get the chance to express more of the positive stories of Hutchence’s life. But it’s a much greater shame that the world lost Hutchence before his time, something Mystify quite effectively conveys.

Mystify is in cinemas from 4th July through Madman Films.

Written By
Kevin Hawkins
More from Kevin Hawkins
In an industry where so many female characters are written and directed...
Read More