La Dernière Folie de Claire Darling (The Final Madness of Claire Darling), or simply Claire Darling in its English release, is based on the novel by Lynda Rutledge and ponders questions about the end of life. When we get to the end, what do we have left apart from our memories and our treasured possessions? Rumination like this seems to be on the mind of this likeable little film from director Julie Bertuccelli. With her behind the camera and a remarkable Catherine Deneuve in front of it, those who want a fine slice of female led French existentialism will find what they’re looking for.

In Vederonne, a small town north of Paris, Claire (Deneuve) wakes up on the first day of summer and decides to Marie Kondo her life. In her later years she’s become reclusive. She spends a lot of her time smoking and diving into the memories that her many treasured possessions bring back to her. Aware that she’s coming to the final act of her days, all the gorgeous treasures she’s collected over her life are dumped on her front lawn and sold at bargain price. As her daughter (Chiara Mastroianni), who she hasn’t seen for 20 years, arrives to try and stop the proceedings, long buried resentments are dug up as Claire’s fiery personality and the ghosts of small town memory consume this fine summer afternoon. 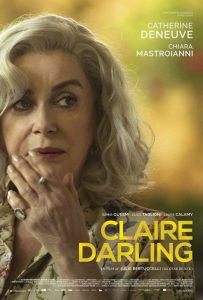 As Kierkegaard once wrote: the annoying thing about life is that you live it forward but can only understand it backwards. Every generation that approaches the end of their days pauses for reflection, and the complications of this are beautifully captured by Bertuccelli. Catherine Deneuve has been acting since the 1950s and has worked with cinematic giants like Truffaut, Polanski and the late Agnes Varda. She of all people would know how our past accomplishments make us what we are. She holds the film together, and considering how much time we spend with her, her screen presence is enough to guide us through the uneven journey.

The relationship between the fiery Claire and her daughter is a wonderfully drawn look at two intelligent women – added extra weight as Deneuve and Mastroianni are real life mother and daughter. Bertuccelli has brought the best out of her leading ladies, the films works on the strength of their performances.

Unfortunately, for all the wonderful things that can be said about the performances, the wonderfully ponderous nature of the film which brings out quite a bit of personal reflection, and Irina Lubtchansky‘s photography of this picturesque part of France, the final ten minutes manage to overshadow everything else. Up until a certain point this is a perfectly nice, inoffensive, middle of the road experience, but the denouement is so bizarrely out of place that it almost ruins the film.

What is meant to be a rather on-the-nose metaphor for getting rid of our worldly possessions, leaving an emotional punch, turns out unintentionally funny. At the end of this melancholy journey I was holding back giggles at the absurdity of what had just happened. Up until this point the film is a quiet reflection on the nature of growing old yet the end changes everything. It’s so preposterous that it’s what you leave thinking about.  It’s like the filmmakers cooked a perfectly nice meal then decided to pour a bottle of BBQ sauce over it. Still perfectly edible, but the strange decision at the conclusion overpowers all the other flavours and ends up being the thing you remember most.

Ridiculous ending aside, Claire Darling is a perfectly nice journey of reflection. At the very least watching the mother-daughter act between the larger than life Deneuve and Mastroianni is a touching relationship between two well drawn characters. That’s always worth seeing.

Claire Darling is in cinemas from 20th June through Palace Films.

Written By
Simon Storey
More from Simon Storey
After its near death experience in 2008 the financial industry under Wall...
Read More