Where do we put Chucky, the homicidal doll, in the pantheon of horror villains? In essence he will always be an elaborate piss-take, a pantomime mashup of horror tropes: from the sentient ventriloquist doll, to the obsessive best friend, to the slasher with supernatural speed and a penchant for surprising people in mirror reflections, usually just after they have moved into a new house. The list is exhaustive, but Chucky laughs in the face of all these cliches and more.

He is evil incarnate and gleefully so. And so it would be remiss if the people rebooting this franchise didn’t also want to have fun with the inevitable carnage. Though things have changed for Don Mancini’s creation since the 80s. Directed by Lars Klevberg from a screenplay by Tyler Burton Smith, Child’s Play does not go in for animated dolls inhabited by serial killer souls. In 2019 it’s far more realistic to imagine that Chucky could be just a malfunctioning robot; one with a USB drive, a warped feedback loop and strong Wi-Fi and bluetooth connections.

There really shouldn’t be anything wrong with him, but in this case one ill turn deserves another, and when a Vietnamese factory worker is ruthlessly sacked by his employer, he leaves with a parting shot: disabling all safety protocols on the Buddi doll he is tasked with programming. Buddi is the latest of technology giant Kaslan’s companion dolls and can be used in any number of ways with the rest of Kaslan’s products like TVs and driver-less cars. That is, he is theoretically a child’s best friend, but to us a creepy monstrosity with the surprisingly chilling voice of Mark Hamill and a lot of downside. 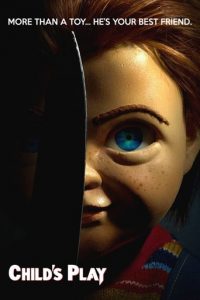 And so this unfiltered Buddi finds its way into the world and into the hands of Andy (Gabriel Bateman), whose single mother Karen (Aubrey Plaza) is making ends meet at the local toy store so that they can make a fresh break. The butterfly effect of one small act of spite can certainly bloom large. It’s an uncertain time full of strong emotions as Andy comes to grips with a new neighbourhood and as he meets his new best friend, a glitchy unfiltered doll, he finds out that Chucky is right there with him for the long haul, for better or worse.

Child’s Play has enormous fun building Chucky from the ground up, taking the angle that you don’t necessarily need an evil spirit to transform a robot’s zeroes and ones into a malevolent combination; a childlike tendency for overgeneralising and raw bursts of emotion and a society desensitised to violence will do that easily enough. The moral of the story seems to be that if things like Chucky exist to create havoc, it’s no-one’s fault but ours if we didn’t see it coming a mile off. And it doesn’t take a genius. Even if any sane person would look at the Buddi doll in its packaging and keep walking, we need only look at a comments section for all of the above to be true.

But this isn’t the point. As with any film starring Aubrey Plaza, it helps to take that distinctive eye roll and apply it to your viewing. This is brutal fun that delivers its fair share of laughs and does so at an economic 90 minutes – neither overstaying its welcome, nor stunting on character development. All in all, while it doesn’t make any claims to greatness, Child’s Play might surprise in its well-balanced blend of thoughtfulness and thoughtlessness, making it an immensely satisfying reanimation of this old favourite.

Child’s Play is in cinemas from 20th June through Roadshow Films.

Written By
Angus Tonkin
More from Angus Tonkin
If you happened to hear about a circumnavigation of the globe by...
Read More