When news arrived that a fourth Toy Story film was in production, some fans were understandably miffed; why would you re-boot a franchise that resolved itself so perfectly in its latest offering? Was Pixar messing with a perfect trilogy simply to sell new merchandise and make more moolah?

But here’s the thing: there’s never been a bad Toy Story film. And Josh Cooley’s Toy Story 4 is compelling evidence that Woody, Buzz, Jessie and Little Bo Beep will never fail to please us, even if we never asked for their return.

The latest episode of Toy Story has many familiar elements: new toys threatening the status quo, toys getting lost, rival toys finding friendship, and toys embarking on an unlikely mission to get the whole gang back together. And it wouldn’t be a Toy Story film without Randy Newman reminding us all that we’ve got a friend in him. Screenwriters Andrew Stanton and Stephany Folsom don’t attempt to mess with this sound structure, delivering little surprises in the way of storyline. If you’ve seen the narrative-heavy trailer for Toy Story 4, you already know the plot.

But like its predecessors, the magic of Toy Story is in its brilliant scripting, its quotable characters and its emotional resonance. Woody’s (Tom Hanks) wild adventure – in which he goes on a mission to reunite Bonnie (Madeleine McGraw) with her self-created toy Forky (appropriately voiced by Arrested Development’s Tony Hale) – is merely an excuse for all of this to take place again.

What keeps this fourth offering fresh are three things: its flirtations with the horror genre, its consistent laughs and its universal themes.

Toy Story 4 evokes the terrifying elements of the film’s original, where Sid, his bull terrier and that creepy spider-baby concoction freaked out children the world over. The film contains at least six jump scares, most of which take place within the unsettling Antique store where Gabby Gabby (Christina Hendricks) and her doppelganger sidekicks – all named Vincent – reside. Some children – and even some adults – may find these scenes a bit too intense, but this ever-present eeriness also provides some of the film’s funniest moments. 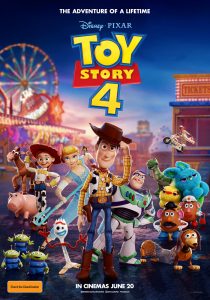 The usual suspects like Mr Potato Head (Don Rickles), Rex (Wallace Shawn) and Ham (John Ratzen) play a limited role this time around, letting new players do the legwork. Each of the new characters justifies their inevitable entrance into toy store shelves by bringing something new to the table: Keegan-Michael Key and Jordan Peele’s Ducky and Bunny are largely unnecessary to the plot, but almost all of their scenes are laugh-out-loud hilarious. Similarly, Duke Caboom (Keanu Reeves) and his back-story is the kind of oddball humour that mainstream films too often avoid.  The real standout is Gabby Gabby, a character who terrifies you as much as she earns your empathy; that’s not an easy combination but full credit go to Stanton and Folsom, who know how to write a good character arc.

When it’s not scaring the daylights out of you or giving you a chuckle, Toy Story 4 tugs at your heartstrings. Again, the writing team should be applauded for the ingenious dialogue, particularly between Woody and the re-vamped Bo Peep (Annie Potts). Themes of solitude, connection, family breakdowns and even sexual freedom are layered over a story ostensibly about pieces of plastic, giving the adults something to reflect upon about while the silliness ensues. And if you shed a few tears during the finale to Toy Story 3, you’ll definitely need the tissues again this time around.

Does Toy Story’s fourth episodes give the series more satisfying closure than episode three? Probably not. Did the franchise need a fourth instalment? Probably not. But is Toy Story 4 a welcome addition to the cannon? Definitely. And if the Pixar team can keep the magic going, they make as well keep them churning them out.

Written By
Kevin Hawkins
More from Kevin Hawkins
You shouldn’t normally judge a film by its title, but in the...
Read More