Written in 1947, barely two years after the Second World War came to its fateful end, Arthur Miller’s All My Sons remains one of his greatest achievements. Its first run on Broadway was one of the milestones that first placed him in the hall of great American writers, earning him his first Tony. After numerous adaptations across its 70 year history, director Jeremy Herrin’s revival on the London West End – in select Australian screens through National Theatre Live – is a brilliant adaptation of a brilliant play.

The Keller family are one of millions of families around the world whose sons took up the call. While their youngest, Chris (Colin Morgan), returned safely, their eldest, Larry, never came home, yet with his body never being found he’s still considered MIA. Family matriarch Kate (Sally Field) is the only person still with hope that Larry might one day return home. Everyone else including Larry’s former lover Ann (Jenna Coleman) has accepted his fate. In this small American home the lives of this family and those around them begin to unravel, as lies and buried secrets from the war threaten everything that the family’s father Joe (Bill Pullman) has spent his life working for.

All My Sons, inspired by actual events that occurred in Ohio in 1944, carries all the hallmarks of Miller’s great works. Beautifully realised characters play off each other in a drama as subtle as it is compelling. Few writers had Miller’s talent for character, as every single one who appears on the stage has a rare depth and complexity. These are all fundamentally good people reacting against extreme circumstances, doing their best in a world still coming to grips with the global order splitting apart. 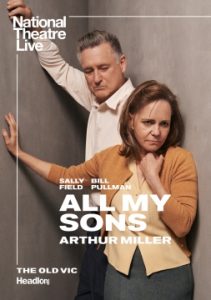 Above all this is a chronicle of the ‘Greatest Generation’, gifted extra dimension considering that it was thought up and written at the time. In American culture few names are as hallowed as those who lived through this tumultuous period; an entire generation that weathered the Great Depression, watched governments across the world tear apart as fascism and communism seemed like genuine alternatives, and above all fought and won the worst war that mankind has ever waged against itself. All My Sons remains one of the great written works of the period, yet its thoughts about responsibility, capitalism and family are still still painfully relevant all these years later.

Performances are strong across the board. Sally Field, in only the third stage play of her career, hasn’t been this good in years. In his first role on a British stage, Bill Pullman across from her has been cast perfectly. These are two of the finest American actors of their generation and seeing them together is a treat. The younger generation – Jenna Coleman and especially Colin Morgan – hold their weight but are simply overshadowed by their elders. Although Morgan, known for the titular character in Merlin, shows off a talent that hasn’t poked through any of his previous work. If there’s one tiny quibble, when there’s two American actors and two British you can really hear the difference between a real accent and a fake one.

Responsibility in all its forms changes how people conduct themselves, and few people have ever explored it better than Miller. The responsibilities that we have to ourselves, our family, our society and our work dictate how we run our lives. Where idealism ends and responsibly begins remains one of the hardest internal conflicts there is.  To see a drama as well realised as the one that Herrin and this cast have provided is exceptional. This is one of the finest National Theatre productions of the year.

National Theatre Live: All My Sons is in selected cinemas for a limited time from 15th June through Sharmill Films.