Take a glance over a biography of German artist Gerhard Richter and you can understand how writer-director Florian Henckel von Donnersmark might have been dazzled by what he saw as cinematic gold. Richter’s life has indeed been remarkable, having grown up just outside Dresden under the shadows of Nazi Germany and the Eastern Bloc to become one of the most influential artists of the 20th century. And yes, that would make for a worthy biopic. But Never Look Away is not it. While it follows much the same trajectory as Richter’s life, it instead tells the fictional story of Kurt Barnert (Tom Schilling), a bloated epic spanning decades and testing patience. Tragedy, villainy and intrigue figure heavily in Donnersmarck’s tale of love, death and art.

As we meet an adolescent Kurt, his family are reluctant adherents to Nazi rule, which is whipping the population into a frenzy prior to WWII. Life is for a time peaceful and Kurt’s life is blessed by the doting attention of his aunt, Elizabeth (Saskia Rosendahl) — young, beautiful and enigmatic. Kurt adores her, as she does him, egging on his artistic talent in spite of the Nazi hard line on what separates proper art from degenerate. However, Elizabeth is not altogether well, and as the storm of war brews and she is diagnosed with schizophrenia, her subsequent victimisation in service of Hitler’s eugenics program hits hard and makes a lasting impression. For Kurt the loss of Elizabeth stirs in him a questioning instinct and a compulsion to seek truth where those seeking to control him are providing only barriers and propaganda.

Years later, living now under Soviet rule after his home town of Dresden is bombed into submission, he finds himself living within yet another set of strictures. His love of art has not dimmed, his talent undisputed, and as a star pupil at the art academy he meets Ellie (Paula Beer), who just happens to have the same name as his aunt and is her spitting image as well. They promptly fall in love and begin planning a life together, but as ever history has a habit of coming back to haunt. There are forces preventing them from being entirely free and art will play a vital part in relieving them of the obstacles in their way: one is the East German state; the other is Ellie’s father, an intimidating man of dubious morals and dark secrets. 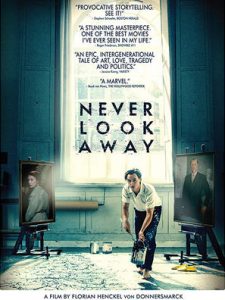 Donnersmarck wants to portray art as a cathartic opportunity or a symbol of resilience, and certainly he demonstrates an excited passion for his subject. We see art mould Kurt’s development from boy to man — from questioning the bile-laden rants on the failures of ‘degenerate art’ to forsaking socialist realism for the West. However, Never Look Away never paints a cohesive picture (pardon the pun), rather we get a sexed up, airbrushed stab at history, full of rosy-cheeked saints and hard-hearted villains. Donnersmarck’s screenplay jumps around wildly in time and in tone, ticking off historical events as if from a checklist. At once keen to illustrate the horror of war and later trivialising the legacy of the Kunstacademie in Dusseldorf with frathouse antics, Never Look Away is ambitious in its scope but careens around its scarred historical landscape with abandon and little consistency of purpose.

Apparently Donnersmarck spent hours with Richter taking notes on his life in order to capture the decades-long breadth of Never Look Away’s diverse subject matter. One might have hoped that he would approach this task with the shrewd observation and emotional intimacy he demonstrated with the remarkable The Lives of Others. Sadly he followed that film with the Hollywood flop The Tourist, and that misguided foray into thriller territory appears to have left Donnersmarck with a deaf ear for narrative development and character. Production values are handsome, but rarely does his film provide much insight beyond superficial platitudes.

Not only is Never Look Away heavy-handed in its preaching cultural treatises, but it flagrantly appropriates a remarkable life (Richter’s) in a language of cliche. That it does so over the course of three hours only compounds the tedium of being tugged from one emotion to the next, all en route to a unhappy realisation that it’s actually quite hard to like Kurt. His lusty romance with Ellie shows more attention to their lack of clothes than to developing Ellie as a person. Her character arc is instead defined by her resemblance to the other Elizabeth and her fertility, while Kurt’s affection seems limited purely to the physical, including boob-grabs and incessant derobing in candle-lit rooms. Sadly Schilling’s presence is not a magnetic one, and Kurt ends up a bland and uninspiring hero.

It is perhaps unsurprising that Gerard Richter has been unimpressed by the cloying results of a film apparently inspired by his own life. Never Look Away wants to be a rallying cry for cultural expression. In reality it is more a prolonged splutter.

Never Look Away is in cinemas from 20th June through Sony Pictures.