There’s no shortage of rags-to-riches musical films. We’ve seen these story beats many times before, yet it’s hard to think of a film that plays it better than Tom Harper’s masterful take on the ‘star is born’ formula. Buoyed by a killer soundtrack and a star making performance by Jessie Buckley, Wild Rose proves that there’s still plenty of life left in musical drama.

After a year in prison Rose-Lynn Harlan (Buckley) is free to pursue her dream: travel from her native Glasgow to Nashville and make it as a country singer. Urban Scotland isn’t the place where the next bluegrass sensation comes from – whisky and gaping stab wounds seem to be the few things that Glasgow produces on a regular basis – but talent like hers demands to be heard. After a life of hard knocks it seems her time has come to make something of herself.

There’s only one problem: the two children under ten that her mother (Julie Walters) took care of while she was away. She had these two before the age of 18 and she left them at a key moment in their lives. Stuck with a job as a cleaner and determined not to give up on the one thing that keeps her going, Rose has a very serious choice to make: be a mother and lie in the bed that she made for herself, or pursue her dream before time runs out. 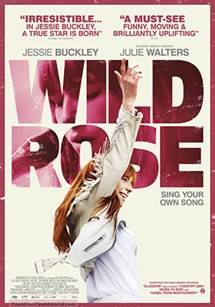 Jessie Buckley, who was so good in 2017’s Beast, seems like she was born for this role. Alongside clear talents as an actor she’s a phenomenally gifted singer, delivering one of the year’s best soundtracks of which she sings almost every song. The last few years have marked her out as one of the finest in the current crop of British acting talent, and this role confirms it. She’s in every scene; this is her film from start to finish and she’s never less than brilliant. Get to know the name Jessie Buckley because we’re going to be seeing her a lot more in the coming years. We’re witnessing the beginning of what looks like an incredible career. Forgive the obvious joke, but it’s true: a star is born.

We know all the story beats of Nicole Taylor’s script but it’s the little details that make this film what it is. It’s clear that this was written by a woman; so many little details and insights speak volumes about the experience of these characters. Few lives seem simple or easy in Glasgow, especially when prison and poverty seem one or two bad decisions away. When asked why she loves country music Rose replies it’s: “Three chords and the truth” – a mantra she even has tattooed on her arm – this seems to be Taylor’s goal with the script. It’s a story we’ve seen before, but one that rises above with human insights that speak the truth of who these people are.


For a film with the final message, and last line of spoken dialogue for that matter, to be as simplistic as “there’s no place like home” to not feel like a cheap and hackneyed cliche is a phenomenal achievement. Bring tissues, as the final five minutes are genuinely moving. Wild Rose is one of the best films to come out in 2019. Like the best of British cinema it isn’t afraid to explore the darker nuances of these characters’ lives and is all the better for it. Just like its main character, it know what it wants and isn’t afraid to give everything it has to it.

Wild Rose is in cinemas from 13th June through Universal Pictures.

Written By
Simon Storey
More from Simon Storey
“The truth is like poetry, and most people fucking hate poetry” When...
Read More