Asterix first appeared in the French-Belgian magazine Pilote in 1958, meaning this large nosed Gaul has been charming audiences for over sixty years. Every school library around the world seems to have an Asterix collection tucked away in the graphic novel section, that and Tintin. Come to think of it, a lot of primary school reading time was spent in the company of French-Belgian comic books.

After several live action adaptations and plenty of hand-drawn animation, the citizens of Erquy have entered the realms of computer animation. The French production Asterix: The Secret of the Magic Potion is the latest in a long line of Asterix films, and everything great about this little hero is here.

As the Druid Getafix decides it’s almost time for his retirement, Asterix and Obelix venture across Gaul to search for an apprentice worthy of brewing his famed magic potion. This potion has kept Asterix’s village safe from Rome’s ever increasing boarders; brewing it correctly is the only thing between them and Caesar’s rule. As the three traverse Gaul, and the Romans lay siege to the village, matters get ever more complex as the dark druid Demonix – Getafix’s old rival – returns for his revenge. 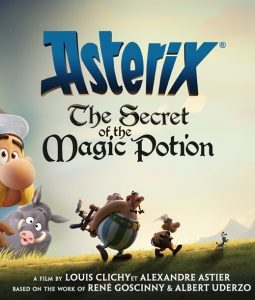 The school holidays might still be a few weeks off but this is no excuse to keep the little ones away from this charming film. While it’s undeniably yet another 20th century children’s book plugged into the animated factory line – along the lines of The Grinch, The Smurfs or that awful Peter Rabbit adaptation – what sets this apart is a very French sense of purpose and the love it has for its source material.

The French pride is evident. This is, of course, a French film, but the cultural influences shine through. These Gaulish villagers live and breath their traditions and history while drinking deep from the potions of patriotic pride. They love their food and wine and aren’t afraid of sparring over the values of tradition.

For adults there’s plenty of slapstick humour that will raise a chuckle, some very pointed jokes about government and Caesar, and if that fails, the sheer size of their noses is worth a few giggles. The final confrontation between Demonix and the Romans is perfect too; it builds up to a climax that’s genuinely surprising and visually inventive. With so many Hollywood films building towards final battles with no excitement or originality, this is what they should be taking influence from.

Asterix has been around since 1958 – when Frank Sinatra was in his heyday, Elvis was drafted into the army and The Bridge on the River Kwai won Best Picture at the Academy Awards – and this little blonde Gaul and his portly best friend show no sings of slowing down. This is a character that has entertained generations and it looks like there’s plenty more to come.

Asterix: The Secret of the Magic Potion is in cinemas from 30th May through Icon Film Distribution.

Written By
Simon Storey
More from Simon Storey
The latest in a string of excellent anime films to hit Australian...
Read More