In today’s culture of streaming and downloading, not having to leave your house to get new music, it’s hard to imagine someone selling more than 300 million records at a time when, in order to buy music, pundits had to go to a record store and hand over actual money to a human shop keeper in return for a physical disc containing said music. Such are the heights reached by Elton John, legendary pianist, composer and some time actor. So what more fitting tribute can there be for a man knighted for “services to music” than a larger than life musical?

And that is just what Rocketman is, a tribute. Though produced by his husband David Furnish and executive produced by the man himself, screenwriter Lee Hall and director Dexter Fletcher (fresh on the heels of completing a certain Oscar winning biopic of another LGBTQI+ rock legend) have taken a fair few liberties with the story of Reggie Dwight. The celebrated songs of the boy from Pinner are used with great effect to accent moments in his life, scored and choreographed beautifully, moving the plot forward. 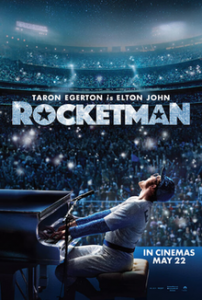 However, despite the extraordinary and immediate success of Elton John, catapulted to the top of the pops in the UK and US on the back of his second album, the film doesn’t focus on the impact of his music, or try to explain how he fit into the musical zeitgeist. His musical genius was evident from a young age, and at just eleven he won a scholarship to the Royal Academy of Music. But his success as a rock ‘n’ roll front man, selling gold records and packing out stadiums, seems to come out of nowhere, and the successful partnership with lyricist Bernie Taupin is portrayed as a kind of lucky magic. The film instead focuses on mining the excesses of the diva’s personal life for entertainment.

Rocketman exploits tensions in Elton’s personal relationships with family and colleagues, particularly his fictionalised strains with his mother after coming out (Bryce Dallas Howard snipes like nobody else), his successful, longtime friendship with Bernie Taupin (brought to life in all of his awe and wonder by a charmingly unaffected Jamie Bell) and his explosive relationship with first love come manager John Reid. The sleazy Scotsman is portrayed here by none other that the King of the North himself Richard Madden, oozing lust and slime, positioned as a villain in the downward spiral that lead Elton to down a handful of pills and attempt to drown himself in his pool in front of a party of family and friends.

The film is visually spectacular and Taron Egerton dissolves into the role of Elton, almost unrecognisable with his flamboyant costumes and receding hairline, flamboyant and over the top, oozing stage presence, a far cry from his star-making efforts as an international modern-day James Bond. Most impressively, the actor actually tackles the vocals of one of the most celebrated musicians of all time, though coached by Elton not to try and imitate him exactly, his musicality is no less impressive for its imperfections. It is going to be hard to underestimate the abilities of the Kingsman actor after this performance.

Rocketman is in cinemas from 30th May through Paramount Pictures.

Written By
Kendal Coombs
More from Kendal Coombs
Set in the very near future, Robot and Frank tells the tale...
Read More