Joseph L Mankiewicz’s All About Eve was an instant classic upon its release in October 1950. Sixty-nine years on, it remains as relevant as ever for its commentary on the pursuit of fame and industry predators are still on point, and its themes of jealousy and manipulation still universal. One only has to look at least year’s Academy Award nominations to see its continuing influence, with the film being re-told in a different era via Yorgos Lanthimos’ The Favourite.

The film’s continuing legacy, dynamic performances and slow building scenes makes it a perfect candidate for National Theatre Live, which not only does justice to a masterful work but manages to capture the story like it never has been before. In a literal sense, the story of a young woman (Eve Harrington, played by Lily James) and her idolisation of her hero Margo Channing (Gillian Anderson) has never been so meta. If the original’s play-within-a-play trope was too much for you, you may struggle to deal with the idea of watching a film of a video being played during a play based on a film about a play. That may sound like a mouthful, but it’s not an inaccurate way of describing the meta-dimensions of this latest All About Eve incarnation.

National Theatre Live, play director Ivo van Hove and screen director Nicholas Wickham do more than just bring this film to life on stage, but work together to create a rich and dynamic experience in which the full potential of both the theatrical medium and the cinematic medium is explored. On stage, a camera operator hovers around the actors, sometimes within plain view and sometimes hiding around a corner. This technique gives us access into bathrooms, backstage areas and side-rooms, all of which are projected behind the actors on an elevated screen. 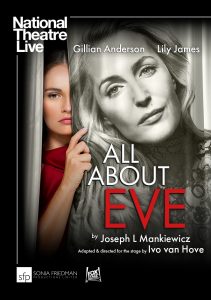 Meanwhile, Wickham’s crew vary their angles for the film version, sometimes focusing in on the projections, and at other times hovering above and around the actors on intentionally tilted angles. Despite these ever-changing vantage points, you nevertheless much leave the cinema very much feeling as though you’ve just been inside a theatre.

Anderson steals the show as Margo, filling the shoes of Bette Davis with aplomb. James’ Eve doesn’t quite reach the heights of Anne Baxter, but she gives an admirable performance in trying to portray one of cinema’s most complicated characters.

For newcomers to All About Eve, National Theatre Live’s version is worthy of being your first taste, although you may wish to arrive a few minutes late to miss some of the needless foreshadowing in the film’s introduction. For those familiar with the classic film, this latest adaption is by no means an essential experience but one that will certainly expose you to the tale in a new light.

National Theatre Live: All About Eve is in selected cinemas from 25th May through Sharmill Films.