Times have been better for long-time partners Chela (Ana Brun) and Chiquita (Margarita Irún), both heiresses of wealthy Paraguayan families. What these lovers have been doing all these years among gentry is, like many things in writer-director Marcelo Martinessi’s The Heiresses, never spelled out in bold. But whatever the attitudes towards their sexuality, whatever their spending habits, the money has dried up and change is inevitable. Their house is tied up in debts, they are busily selling off assets and time has all but run out with Chiquita jailed for fraud.

Chela, the more passive of the two, is left to pick up the few remaining pieces of a life dissolving into legal fees and picked upon by bargain-hunting vultures. Tentative but liberated, she slowly finds her feet in a new world, one in which she is no longer one of the neighbourhood’s rich elderly women but rather their driver, an object of charity and pity – a humbling transformation. Though her taxi service has its pluses. She enjoys the freedom, she likes to be valued and she soon strikes up a connection with Angy (Ana Ivanova), a bold young woman whose flirtatious nature spurs in Chela a minor revolution.

The Heiresses on its surface may subscribe to a familiar cliché of cinema, the late-in-life reawakening, though to put it in the same category as something like, say, Poms (also currently in cinemas, about a group of retirement-home cheerleaders) would be an insult to intelligence. With few words, little fanfare and seeming melancholic ease Martinessi delivers an intimate and even mildly sensual portrait of a quietly spoken woman coming to grips with a new identity, a new social landscape, a new obsession. 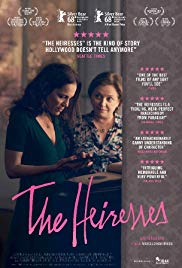 There is something to be said for a film that doesn’t impose a moral imperative on elderly people to invoke ‘carpe diem’ to justify their final years of existence – join dance classes, become teenagers again, don a perpetual smile and get busy with fellow widowers. Such ‘you only live once’ gimmicks have been all too commonly presumed by filmmakers to be the natural appeal for this cohort. This makes Martinessi’s depiction of Chela’s internal struggle such a refreshing point of departure. That his film conveys so much with such gentle expression and so shy a protagonist is testament to his powers of observation and his willingness to let catharsis come slowly, not shovel his characters into a plot that thrusts events upon them.

Chela’s journey is defined here less by proactivity than by patience and introspection. The Heiresses refuses to indulge a fairytale but instead respects the complex emotions of someone daunted by change at an age where possibilities for fulfilment seem only to be narrowing. That Martinessi executes this feat while offering such poignant and damning insights into Paraguay’s conservative elite is a bonus.

It is Brun however that makes The Heiresses. Through her spectacular performance we see a woman silently dissecting her previous life, along with the role that Chiquita and her wealth played in sustaining her status. In her movements hovering outside the room in which her taxi clients play cards and chatter, we see the hesitation of someone stripped of the protection from judgement that was offered by inherited prestige. Now she must adapt to a life of diminished privilege. In her self-conscious ticks of vanity around Angy we see a bewildering internal conflict between desire and doubt. As she pretties herself she is excited by an infatuation of a type she perhaps hasn’t experienced since youth – who knows – but it’s a worried sensation; pragmatism, Chiquita and the passage of years weigh heavily. Brun’s ability to communicate so much with so few words is truly immersive.

After screening at the Cine Latino Festival earlier this year, it seems only right that Martinessi’s film should find a wider audience. As a love story it is pained and heartfelt. As a character study of a demographic rarely scrutinised in cinema it is a subtle and affecting triumph. And as a film driven by character rather than contrivance, it is nothing short of a relief. More like it, please.

The Heiresses is in cinemas from 23rd May through Palace Films.

Written By
Angus Tonkin
More from Angus Tonkin
Anyone hoping for grounded realism in the work of Yorgos Lanthimos can...
Read More