After winning seven Goya awards including Best Director, Best Actor and Best Original Screenplay, Rodrigo Sorogoyen’s political thriller The Realm arrives on Australian screens. Although this tale of political greed and public contempt might leave a bad taste in the mouth of all of us still reeling from Australia’s election result, Sorogoyen has created an equal parts thrilling and scathing look at the Spanish political establishment.

Antonio de la Torre is Manuel, Vice-President of a district government branch who seems to relish the wealth the position awards him. Being in politics gives him every vice he could want; he attends strip clubs, takes yacht rides with his friends and seems to have a tailored suit for every day of the week. The life it affords his wife and teenage daughter isn’t bad either. The party’s leadership isn’t above bribery and corruption; they’re all in on it and they seem to be arrogant enough to think they won’t be caught. This is until this house of cards starts falling. Although they’re all complicit Manuel is singled out to take the blame. With his career and family on the line he’s not going quietly. If he goes down he’s taking the party with him. 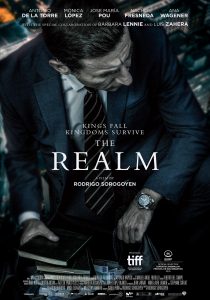 Thought it’s clear that Sorogoyen has a damning view of Spanish politics, for those of us who aren’t familiar with the intricate world of Madrid government a lot of the more pointed critique will go over our heads. Antonio de la Torre makes for a compelling lead to guide us through the more complex elements but it’s hard to figure out the finer points being made. “Arrogance is this country’s evil” one of the party bosses says; maybe the Latin temper combined with their rich history makes the government of Spain more hubristic than usual. After all: this was country ruled by a legitimate fascist until 1975.

For a film mainly about political factionalism the filmmaking is more in line with an action film or a thriller. The opening scene takes place in an upperclass seafood restaurant and the audience is simply thrown in the deep end. The dialogue is fast – though that might just be because Spanish speakers seem to go 100 words a minute – and the various players in this intricate game begin scheming immediately. It starts quickly and it doesn’t slow down. The subtitles hardly have time to catch up, so it’s lucky the film comes into its own in the second half. Editing is sharp and the camera barely stops for a breath. When the skullduggery begins in earnest it’s genuinely pulse raising. All credit to Sorogoyen that he can make something as simple as a man trying to get into a door at a party exciting.

Although familiarity with Spanish politics seems to be a prerequisite, The Realm succeeds as a thrilling and tense look into political corruption. Democracies around the world are all feeling the sting of the age of the internet, when everyone is a critic and ideas and lies spread faster than ever before. Both the people and the politics have been led astray. It doesn’t look like we’re getting back on track any time soon.

The Realm is in cinemas from 16th May through Rialto Distribution.