Stuntman turned director Chad Stahelski’s John Wick trilogy reaches violent new heights in its third outing. Parabellum, coming from the latin phrase ‘Si vis pacem, para bellum’ (If you want peace, prepare for war), is this series’ longest and most intricate outing, doubling down on both lore and body count.

After being declared ‘excommunicado’ at the end of John Wick 2 for killing a member of the High Table on the grounds of the Continental, John Wick is injured and has a price of $14M on his head. Picking up immediately where the second film left us, John has one hour to get out of New York City before his contract becomes active and every assassin guild in the world begins hunting him. His escape brings him back to where he began: the Russian faction of the underworld with its ballet teaching matriarch (Anjelica Huston). It isn’t just other hitmen out for blood this time, it’s the administration itself.

John Wick 3 is one of the best action films since The Raid 2. This series has always been known for inventive action and Parabellum takes it to new heights. Substance takes a back seat to style and violent spectacle, but if it’s not broken don’t fix it. Stahelski knows what has made this such a beloved series and doesn’t deviate too much from the formula. This trilogy stands out not just because of the action, but also the filmmaking to back it up. There’s no quick cuts or shaky cam here; Evan Schiff’s editing holds on shots long enough for them to have maximum impact and Kevin Kavanaugh’s production design looks amazing. 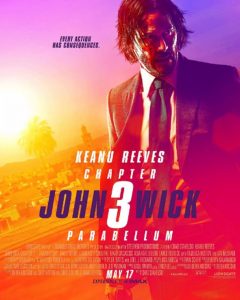 That being said, the sheer ‘wow factor’ of these fights never fails to astonish. The body count is more than the first two combined and the sheer violent inventiveness is laudable. There are knife fights, axe fights and katana fights. People get shot with western six-shooters, shotguns, rifles and handguns. Dogs maul, cars run over, and horses kick people to death. There’s a horse vs. motorbike chase scene which will rank as one of the year’s best actions scenes and the single greatest book fight in the history of cinema. It’s not a film for the squeamish, but for sheer spectacle it’s worth every cent of the ticket price.

Keanu Reeves – who looks astonishingly good for a 54-year-old – holds proceedings together and actually did a lot of the stunts and fight scenes himself. This series has a habit of brilliant casting choices and the new batch doesn’t disappoint. Mark Dacascos has never been cooler as Wick’s Japanese rival with a penchant for swords. The standout is Asia Kate Dillon, who almost steals the show as the High Table’s Adjudicator, sporting a fabulous long trench coat and a thousand yard stare.

Although it’s a tad overlong – the series has gotten longer with each film and this is the first time it feels it – John Wick 3 delivers on what fans of this series are looking for and more. The lore is expanded on and the action is better than ever before. This is bravado action filmmaking of the highest order. Baba Yaga is back.

John Wick: Chapter 3 – Parabellum is in cinemas from 16th May through Studiocanal.

Written By
Simon Storey
More from Simon Storey
Written and directed by Paul Downs Colazzio, and inspired by his roommate,...
Read More