The year is 1819. In the north of England the working class are governed by their stomachs, and committing petty crime gets a sentence to the penal colony of Australia. Only a year after Napoleon met his downfall at Waterloo, the British establishment, in one of the most infamous days in the history of English democracy, turned its fury on the populace of Manchester.

Winning the Napoleonic wars hasn’t led to prosperity. The rapidly rising tide of poverty pushes working people in the English north to become ever more vocal about social reform. Many families go to bed not knowing where their next meal is coming from, while the industrial revolution ensures that the ruling class gets richer. In this social miasma reformers like Samuel Bamford (Neil Bell) and Henry Hunt (Rory Kinnear) gain followers, something that the powers-that-be won’t let go unchecked.

Until now there hasn’t been a feature film about the Peterloo massacre. On the 200th anniversary of that terrible day Mike Leigh delivers an ambitious mix of sweeping political cinema interspersed with his signature talent for social realism. Peterloo will be taken to the bosom of those that love political and social theory but it’s far too esoteric for those wanting a run-of-the-mill historical film. 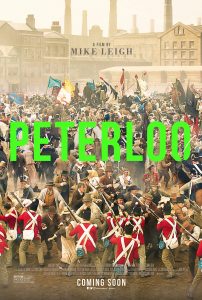 A tremendous amount of detail has gone into setup. All the action is reserved for the very end, and keep in mind this is over two and a half hours long. Instead Leigh delivers scene after scene of people debating, discussing and making speeches. It’s hard to think of a film that has more impassioned speeches in it. There’s many characters in a lot of different places, we’re shown every level of society from the working class to the monarchy and Leigh isn’t in a hurry. The social conditions and workings of society are addressed in detail. Marx was sixty years in the future, so it wasn’t a case of people misunderstanding conditions, but rather that they didn’t have the framework to critique them.

Mike Leigh made his name in the British Social Realist movement – ‘Kitchen Sink Dramas’ as they’re sometimes called – and the spirit lives on. There’s a sense of populist anger coming from every scene and Leigh’s disgust at the current state of British politics shines through. In the age of Brexit it comes as no surprise that the London elite are in his crosshairs, as the everlasting struggle between the have and have-nots play out before our eyes. Come to think of it, Ken Loach’s masterpiece I, Daniel Blake from 2016 would make a fine double feature. The portrayal of Northern England as not only forgotten but subtly repressed by the out of touch London bubble isn’t a criticism that’s slowing down.

As people become more informed than at any other time in human history it becomes clearer that the stories we tell ourselves are changing. The British working class existed outside of the historical narrative for a thousand years; Mike Leigh has become their great chronicler through the medium of cinema. The past is prologue, and to understand the situation we find ourselves in films like Peterloo are needed. This is an epic for those that like their cinema dense, political and furious.

Peterloo is in cinemas from 16th May through Transmission Films.

Written By
Simon Storey
More from Simon Storey
Directed, co-written by, and starring Mathieu Amalric, who most people might know...
Read More