It’s a real skill to find the right way to express your creation. It’s okay if there’s not enough to sustain a two-and-a-half-hour feature film, or hours of a TV show (looking at you, unnecessary ten part Netflix series). But if you don’t know that as a creator, then you risk losing your audience’s attention. Unfortunately, that’s exactly what happens with Dominique Rocher’s The Night Eats the World. There are moments, ideas and concepts scattered through this interestingly insular take on a zombie movie, but not enough to justify it running to 90 minutes. Brevity is the soul of not just wit, and Rocher could stand to cut at least 30 minutes from his film, to make it much tighter and maintain the flow; a short that keeps its grip on you throughout.

Drawing people in with the genre hook of the zombie apocalypse, The Night Eats the World is actually more of a melancholic, existential look at loneliness, survival, and its cost. Sam (Anders Danielsen Lie) drops by the Parisian apartment of his ex to pick up some of his stuff, but she and her new boyfriend are having a big party (soundtracked to some electro reminiscent of the original Dawn of the Dead music). She puts him off, tells him to enjoy himself and interact with people for once. After waiting and knocking back a few drinks, Sam presses his way to a back room through an already zombie-like mass of partying bodies, getting a knock to the face on the way. Locking the door to get some peace, he sits to soothe his banged head and promptly falls asleep. He wakes up to an empty, trashed, blood-covered apartment. He’s soon slamming the door in the half-torn off face of his ex and watching people in the street trying to escape get ripped apart by an undead horde. 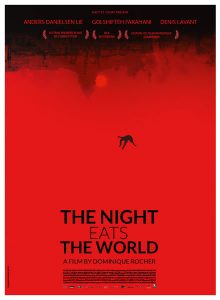 The Night Eats the World isn’t interested in what happened or how, but about what happens next. This is more Cast Away than 28 Days Later. Introverted Sam seems somewhat content with the situation. He doesn’t try to contact anyone or find out what’s going on outside the confines of the isolated apartment building. It’s more about setting himself up a safe life, running this world on his terms in these opportunely huge French apartments. In long, dialogue-free stretches, he assesses and clears the building (marking zombie occupied apartments with plague-like X’s), gathering the tools for survival and then things to live a life. The zombies become little more than background dressing, with any tension only coming when Sam deliberately puts himself in harm’s way (when the practical effects, impressive for the surely limited budget, outshine direction which leans towards the pedestrian). While there are affecting moments – like how he deals with the discovery of an old couple in the apartment below – the more interesting ideas are discarded in favour of just following Sam’s new routine. Much of this time merely unintentionally mirrors the tedium of survival as he scrapes through on rations and supplies as meagre as the narrative thrust.

As time unravels so does Sam, and Lie works really hard to convey his deteriorating mental and physical state. But the sparse dialogue – simultaneously shot in both French and English versions – is sometimes so unsubtle, and Lie uncomfortable in his delivery, that it would have been better to be even more scarce. In fact Lie is much more arresting when he doesn’t talk at all – and he only need look across to zombie co-star Denis Lavant (Holy Motors) to see what can be achieved with no dialogue at all. By the time Sam thinks about leaving the building I didn’t really care what happened to him, and was never given much reason to.

The Night Eats the World primarily suffers from having running time as bloated as a forgotten corpse – disappointing when there’s enough for what could have been a tightly wound, smartly spun survivor yarn focused on how and why we survive when society is falling down around us. But there just might be enough to draw in those looking for something a bit different from the zombie subgenre.

The Night Eats the World is in cinemas from 9th May through Arcadia and FilmInk Presents.

Written By
David Nagle
More from David Nagle
There’s something especially gratifying about watching survival movies. They can distil the...
Read More